Factary’s New Trust Update (NTU) archive database currently has 3,900 trusts and foundations in it as of February 2022. These are all the grant-makers that have been featured in NTU since 2005.

To add value to the database, which is accessible online exclusively to NTU subscribers, we update the records with the latest financial information available from the Charity Commission. We also update the classification information on which trusts have been removed from the Charity Commission register and which are financially inactive. This information allows subscribers to quickly and easily see how large the various trusts are, and therefore which ones are likely to be able to make the largest grants. The database also includes classification information on the potential areas of interest of the grant-makers.

Analysing this data, we can provide a useful overview of the grant-makers in the database and provide some interesting insights into the UK trust and foundation market. We have produced a short report detailing this analysis which can be downloaded here. The highlights are:

In 2021 there were 228 new grant-makers featured in NTU. 43 per cent of them had general charitable objects, but the next most commonly supported areas were Poverty & Welfare, Education & Training and Health. 2021 saw 31 new Foundations of Wealth grant-makers founded by wealthy philanthropists, with a combined estimated wealth of over £11.7bn. There were also 36 corporate foundations featured in NTU in 2021.

As is shown in the report, over a quarter of newly-registered grant-makers go on to have an expenditure in excess of £100,000 in their first year of operation. This makes NTU a useful tool to find out about these grant-makers as soon as they are registered, and gives subscribers a head start in building relationships with new philanthropists.

You can see further analysis on the grant-makers featured in New Trust Update and that make up the online archive database by downloading a copy of the report.

If you would like to learn more about Factary’s New Trust Update then please contact Will Whitefield: will@factary.com.

In 2019 Factary’s New Trust Update contained profiles of 222 newly-registered grant-making trusts and foundations. Our review of the year found that 51 of these were founded by individuals with an estimated wealth of at least £10m, which equates to nearly 1 out of every 4 trusts featured in our reports. The combined wealth of these philanthropists is just under £26bn and includes a number of global philanthropists who have chosen to set up a foundation in the UK.

Our infographic report, available to view here, includes a range of useful analysis and statistics including the philanthropic areas of interest of the trusts and foundations featured throughout the year, the source of funds of the High Net Worth Individuals creating their own foundations and their geographical distribution. It also includes mini profiles on a handful of the most interesting and potentially major foundations and their settlors.

Whilst there are on average around 100 new organisations registered with the Charity Commission each month that state they make grants to other organisations, in practice the vast majority of these are not what would be considered grant-making trusts or foundations. We scrutinise and carefully select the organisations that are featured in New Trust Update, making it a vital resource for finding out about new sources of funding in the foundations market, particularly from High Net Worth families and corporates. With details on around 20 new grant-makers each month, including notes on the professional and philanthropic interests of the settlors and interview notes on the aims and objectives of the trusts and foundations, New Trust Update gives fundraisers a head-start on building relationships with these new philanthropic vehicles before they appear on any other directories.

Subscriber numbers for New Trust Update are limited to maintain exclusivity of the information contained. If you would like to find out more, or to receive a downloadable version of the report, then please contact Will Whitefield or call us on 0117 9166740.

As part of an MA in Philanthropic Studies (undertaken at the Centre for Philanthropy at the University of Kent) I completed a study which aimed to identify the role that prospect research plays in major donor fundraising. The study involved a survey, undertaken in 2018, of major donor fundraisers and prospect researchers working in higher education institutions in the UK. I’m pleased to say that the results of the study are now available to download.

As a quick summary the results of the study cover a number of areas, such as:

Beyond GDPR, the paper highlights that, on the whole, the prospect research community is not particularly good at gathering evidence which illustrates the impact (or the ROI) of prospect research. That said, it does also show that the vast majority of major donor fundraisers are overwhelmingly positive about the ways in which prospect research supports them in their work.

If you think it might be useful for you or your organisation, please do download the paper and (when sufficiently caffeinated) have a read. I’d be more than happy to answer any questions or chat about the data/paper in more detail if you’d like to get in touch.

I have just had this lovely email from Alastair James, Senior Consultant at Global Philanthropic. He read my book, ‘How Philanthropy is Changing in Europe’ and wrote:

I just wanted to say what a wonderful book you have written.

It is a fascinating volume, full of interesting and well-researched material, and I have learned a lot by reading it. You have approached the subject with the rigour of a true academic, but you have written it in a very engaging and accessible style.

I have come away with an overwhelmingly positive impression of philanthropy in Europe from reading your book, although you have also been very clear about the lack of information available in the sector. The fact that foundations are starting to be more open is a very good sign.

I also think that, in the current difficult climate, the book provides a lot of encouraging messages for fundraisers – not least the fact that fundraising has been going on for a long time in Europe, and will, for sure, continue to do so.

My warmest congratulations to you on this superb book.

Chris Carnie is the author of “How Philanthropy is Changing in Europe”, published by Policy Press. He writes in a personal capacity.

Have I mentioned my new book? (It’s the vain author’s constant refrain.)

Yes, I know I have. But that was pre-publication. Now I have an actual copy in my hands, so that means that the orders have started shipping from Policy Press. 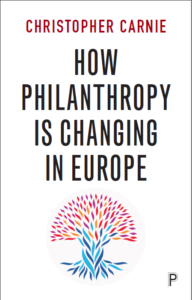 This is a book for practical people. It’s about how high-value philanthropy is evolving across Europe, so practical people in fundraising, in prospect research, in social investment, in policy making and in education will all find – I hope – useful information here.

If you are a major donor fundraiser interested in why your donors keep asking about impact, you’ll find an answer here.

If you are a private banker or wealth adviser who wants to understand why your clients keep on asking about foundations in France, you’ll find out why, here.

If you are a policy maker wondering whether to recommend further tax relief for donations, then you’ll find the arguments here.

If you are a prospect researcher, wondering where to look for potential supporters in Switzerland, you’ll find some answers here.

And if you are the director of an NGO, wondering what your strategic priorities should be, you’ll find some suggestions here.

I hope you find it useful.

Order “How Philanthropy is Changing in Europe” directly from Policy Press, here.

Why so few women in UK foundations?

We’ve analysed all of the newly created grant-making trusts (foundations) registered in England and Wales since 2005 – a data set of 2,312 new grant-makers. Our findings are in a new Factary report, ‘Trust Women’, available for download here.

Our report is based on Factary’s New Trust Update dataset (http://factary.com/what-we-do/new-trust-update/ ).

To find out more about this data, contact research@factary.com

There is a kitchen theme in this year’s Foundations of Wealth, published today, with Gordon Ramsay featured alongside the owner of the UK’s largest franchise for Domino’s Pizzas, and a kitchenware manufacturer.

They are three amongst 42 wealthy philanthropists who have set up a grant-making trust during 2014, all of them profiled in depth in our freshly-prepared report.

New trusts appear to be boys’ toys. 93% of the wealthy founders whom we profile are men, with just 7% women. That is the same ratio as in 2013, and slightly more male than in 2012. It reflects the gender imbalance in great wealth in the UK with around 10% of the Sunday Times Rich List being women, and a hard-to-explain gender imbalance in structured philanthropy. As “Untapped Potential” reported in 2011, just 4.8% of European foundation grant monies go to women and girls (see Shah, Seema, Lawrence T McGill, and Karen Weisblatt. Untapped Potential: European Foundation Funding for Women and Girls. New York: Foundation Center, 2011.) Factary is currently engaged in a study of philanthropy amongst women of wealth to try to find out why.

As in previous reports, the founders of UK grant-making trusts are economically active – more than two thirds (69%) are under 65 – a similar percentage to 2013 and a slightly younger profile than 2012, when 53% were under 65.

Their’s is new money – more than three quarters are self-made millionaires – with wealth principally from financial services, retail, manufacture and property. The total wealth represented by the 42 we have profiled in depth is over £6.8 billion – reflecting the increasing concentration of wealth in the UK.

The founders are distinctly international, with four people of Indian descent and three others with non-UK nationality, as well as founders who have lived and worked abroad. The UK is not the easiest country in the world in which to create a charitable foundation (it is arguably easier in the Netherlands, for example) but the combination of a wealth management industry that is growing and gearing up for philanthropy, a broadly stable economic climate and people – philanthropists – who want to make their giving more effective has led to a boom in the establishment of trusts. Last year we reported on 214 newly created grant-making trusts in our monthly New Trust Update report.

Could you build a partnership with these new trusts and foundations? Our report tells you about the founding philanthropists, about their philanthropy

Philanthropy is alive and well in the UK amongst people of wealth. These good 42 at least are willing to share their wealth with the rest of society.

Key findings in the 130-page report include:

The top 10 UK law firms donated more than £5m in cash to charitable causes in the last year; firms give eight times as much in pro bono work as they give in cash.

Law firms stated CR themes are, in order of preference, Education & Training, Housing & Employment, and Rights/Law & Conflict. By contrast, we found that publicly reported donations are focused on Health, Children/Youth and Arts. We analyse these differences and suggest reasons in our report

New research from Factary reveals that during 2009-10 there was a “New Trusts Recession” – four consecutive quarters in which the numbers of newly registered grant-making trusts declined.

That recession is now over. Our latest research paper reveals some of the patterns of grant-making by new trusts.

The research is based on cross-analysis between our New Trust Update database and our Factary Phi database.

Why do philanthropists set up their own grant-making trust or foundation?

We have compiled the research we carry out each month for our New Trust Update report into a briefing paper. In the paper we give detail on the backgrounds of the people who are setting up new grant-making trusts and foundations in the UK and identify 6 key motivations.