Welcome to the May 2015 issue of the Factary Phi Newsletter.

In our Major Giving News for this month, we’ve reported on newsworthy donations from across the sector, with the latest news on a £10m donation from Sir Ian Wood, and a £5m donation from Cristiano Ronaldo and £400,000 legacy left by Gabrielle Ellinger.

An Independent Mission: The Voluntary Sector in 2015

This month, we have included our summary of a recent report on the state of the sector. The report is entitled ‘Managing in the New Normal’ and the research was conducted by PwC, the Charity Finance Group and the Institute of Fundraising.

. For our Database Update, we have decided to survey donations made to Universities across Phi.

Finally, in our Profiles section for this month, we’ve chosen to take a look at The Tudor Trust and a selection of its Trustees.

Sir Ian Wood is set to donate £10m to fund the construction of a new car park at Aberdeen Royal Infirmary.

Sir Ian and his wife reportedly pledged to donate the money after becoming concerned about the lack of space for patients arriving at the infirmary. Presently, around 1,000 vehicles are brought to the hospital site every day, but there are only 800 patient and visitor spaces available, causing a great deal of stress.

If approved, the new 1,000-space multi-storey car park will be built next to the main hospital entrance, which should go a long way towards alleviating the issue.’

Sir Ian made his name through his own Wood Group, which was founded by his grandfather as Wood & Davidson, then a ship repair and marine engineering firm. Under Ian’s leadership, the company moved to take advantage of the 1970’s North Sea oil boom and successfully won contracts with some of the giants of the oil industry, making him a billionaire.

Speaking on the donation, Professor Stephen Logan, chairman of NHS Grampian, said: ‘I am absolutely delighted to accept this very significant donation from The Wood Foundation on behalf of the Health Board. This will allow us to provide a facility that is much needed.’

Cristiano Ronaldo has pledged donate £5m to Save the Children’s earthquake relief effort in Nepal.

The disaster has claimed 8,000 lives, and the Real Madrid footballer has also urged his millions of followers on social media to donate to the cause as well.

Scottish academic Gabrielle Ellinger has left £400,000 in her will to the Council for At-Risk Academics.

As a child, she was forced to flee from her home country of Germany when her family were identified as ‘non-persons’ by the Nazi government, owing to their Jewish ancestry.

The group then known as the Academic Assistance Council aided her father, who was also a scientist, in relocating to Britain with his family. She later moved to Aberdeen with her mother, where she would go on to work as a research scientist at the Rowett Institute.

Dr Ellinger also left gifts of £10,000 each to the Aberdeen Association of Social Services, Age Scotland, the Royal National Institute for Deaf People, and the University of Aberdeen’s Development Trust in order to help to fund other research projects.

Report: Managing in the New Normal 2015

This month, we have included our summary of the 2015 edition of the ‘Managing in the New Normal’ report, conducted by PwC, the Charity Finance Group and the Institute of Fundraising.

The report is intended to assess the outlook for the charity sector as a whole in the current economic climate. It has been conducted year on year since the global economic crisis, and this is the 8th edition of the report.

The Political and Economic Backdrop

The good news is that charities in the UK now appear to be becoming stronger and more resilient than ever before. The reason for this, it is stated, is because they have recognised the fact that the current political and economic environment has made it even harder for governments to support the sector financially, which in turn has fostered a desire for alternatives.

With this in mind, respondents were asked what their main priorities were for the new government, and many stated that their main objective was to ensure further promotion and engagement with charitable giving (29%), and nearly 20% also stated that they wanted the next government to improve tax-efficient giving (Gift Aid and Payroll Giving).

Given that 33% of respondents felt that there has been an increasing demand for their services in recent times, this suggests that now more the ever, the sector will need to rely on the public through fundraising in order to meet the increased demand for their services. This also links closely with respondent’s second most important priority, which was ensuring that the sector is able to sustain itself (27%).

16% of respondents felt that the government’s top priority should be to improve relationships with commissioners, which does suggest that some in the sector have a desire for the government to improve the commissioning environment. However, this percentage does in turn suggests that while some may consider it a priority if they want a role in service delivery, not all organisations will be looking to bid for contracts.

Only 6% felt that social finance should be considered a top priority, and in the current economic environment, 22% of respondents felt that competition between charities will be the sector’s most important challenge going forward.

Has there been an increase in demand?

70% of respondents agreed that there has been over the last 12 months, and the same people also stated that they expected a further increase in demand over the next year. This seems to have been most keenly felt by smaller charities, with 78% agreeing with the above and 80% expecting a further increase. Larger charities responded 65% and 64% respectively.

When asked if there are sufficiently resourced, 28% said no, which was up from the previous 16% in last year’s survey.

Transparency, the Steps Involved and Motivation

The challenges of the ‘current environment’ refers to more than just the current financial climate, the report states, and its analysis also incorporates the wider public arena in which charities operate.

Last year, respondents overwhelmingly stated (over 80%) that the sector had been subject to increased sense of public scrutiny and media interest. Half of the charities surveyed said they had taken steps to enhance their levels of transparency and disclosure of financial information over the last 12 months. This year, an even higher proportion (61%) said they are taking steps to enhance this due to the higher level of scrutiny.

In terms of their motivation, the most popular reason by far was in order to adhere to best practise, while over a third said that this was because of the expectations of their donors.

Key Findings of the Report

The political and economic background

Response to the current environment

For this month’s edition of our Database Update, we have decided to take a look at all donations to have been made to Universities, and other related organisations across the database both in terms of the typical donation value, and also in terms of donor type (Individuals, Trusts/Foundations, Companies etc).

At present, there are 165,392 records of donations in Phi that have been made to causes which include ‘University’ in their recipient name. This represents just under 30% of all records contained in Phi, and a minimum of £2,953,249,468 in terms of value.

Please note that for the sake of accuracy, where an exact donation amount was not included, we have instead used ‘gift band lower’. Those records which do not include an amount, or those with only a ‘gift band upper’ have been excluded from the survey.

Below, we have included a bar chart showing some of the most frequently made donations to these types of causes in terms of their value, split by bandings according to amount. 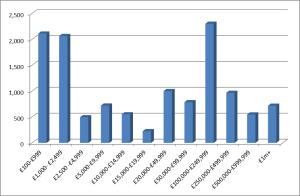 As is evidenced by the above graph, some of the most common, or frequently publicised donations to have been made to Universities appear to have been in the £100-£999 bracket, and also in the £1,000-£2,499 bracket. This is perhaps unsurprising, as you might expect the greater proportion of recorded donations in this activity type to have come from individuals, who are perhaps former alumni that might regularly donate these amounts to institutions which they are in some way connected with.

Interestingly however, there is also one other banding that sticks out in comparison with the others. Where Universities are concerned, the £100,000-£249,999 banding also contains a significantly higher proportion of donations with a publicised amount in comparison with many of the other, closest bandings.

Below, we have also included two charts which compare the £1,000-£2,499 and £100,000-£249,999 brackets mentioned above, split according to donor type, just to see if there are any notable similarities or exceptions

As is evidenced by the two charts above, donations in the larger banding are almost exclusively made up of gifts from Trusts & Foundations. Given that there is also a significantly higher number of donations made in this banding than any other, this could provide some indication of the most popular or widely publicised donations to have been made to Universities from the Trusts/Foundations donor type overall.

Founded in the year 1955, this foundation was established by Sir Godfrey Mitchel, a construction engineer and entrepreneur who at one time ran the most successful construction company in the UK.

Godfrey Mitchel was born in 1881 and started his career not in construction, but in a quarrying business owned by his father. As a child, he attended Haberdashers’ Aske’s School at Hatcham and then joined his father’s company, Rowe & Mitchell, where he worked for a time. From there, he would then join the Royal Engineers during the year 1919 on a temporary commission, and served in France.

After being de-mobilised, he returned to England and decided to purchase the construction company George Wimpey. Originally founded in the year 1880, it began as a stone-working partnership that found success with various projects including the construction of Hammersmith Town Hall, London’s first electric tramway and also the 80,000-seat 1908 Olympic Stadium.

The company’s original founder (George Wimpey) died in 1913, and his company was then acquired by Godfrey several years later. He decided to keep its original name, and he also remained Chairman of the company until his eventual retirement 1973.

Under his leadership, George Wimpey became a property developer as well as a contractor, and by 1930 they were building around 500 houses a year. However, this was to cease with the outbreak of the Second World War when the firm was forced to move into defence work, included the construction of aerodromes, factories and army camps all for the war effort.

It was not until later in 1954 that building control laws in Britain were eventually relaxed, which crucially allowed George Wimpey to use its substantial infrastructure to exploit the need for new housing during the period. From there, the company became the country’s first national house builder, allowing them to build private houses at an astonishing rate of 12,500 per year, which in comparison, was three times the rate of the nearest competitor.

When the company was first taken public in 1934, it was decided that his trust would hold around half of the firm’s shares, however this was substantially reduced over time. Godfrey Mitchel retired from his position as Chairman in 1973, and his trust later became known as the Tudor Trust from 1979 onwards. He died in in 1982.

James Long is a writer and an executive producer for the Shanty Theatre Company.

Ms Monica Anne Barlow PHD is a research consultant and she is also a team member at Bees for Development.

Mrs Nell Buckler is a farmer and a former Director of Grove Charity Management Ltd.

Her daughter, Carey Buckler is a regional sponsorship manager for the trust.

Mrs Louise Katherine Collins is a farmer and a former Director of Tristram Tractors Limited and Grove Charity Management Ltd.

Her daughter, Amy Collins is an osteopath and a Director of Oak Park Clinic Ltd

Mr Matt Dunwell is a farmer.

Francis Runacres is an accountant.