Welcome to the July 2015 issue of the Factary Phi Newsletter.

The Future Fund is set to receive a £1.5m donation to fund the construction of a pioneering new cancer centre, named the Newcastle University Centre for Childhood Cancer.

This latest donation has been made by the Wolfson Foundation, and it is hoped that the remaining funds required in order to reach the campaign’s £5.5m target will soon be generated.

Speaking on the donation, Paul Ramsbottom, who is Chief Executive of the Wolfson Foundation said: ‘The Wolfson Foundation has a long track record of funding excellence, and we are delighted to be funding Newcastle’s Centre for Childhood Cancer in our 60th anniversary year. We are committed to funding outstanding work across the UK, and are particularly pleased to be making a significant investment in the North East.’

Primarily, the centre is intended to develop new therapies for child cancer patients that will allow for fewer side effects, along with improved facilities for children suffering from advanced cancer, or for people who have suffered a reoccurrence of the disease.

An ambitious fundraising campaign from the development project Open Treasure hopes to raise £300,000 for Durham Cathedral.

Their unique approach involves the construction of a 300,000 Lego brick model of the Cathedral, which as far as possible, will be an accurate and to scale version of the building in real life. Fundraising for the campaign works as follows:

For every £1 donated to the project by the public, one Lego brick is then added to the model version. The first of which was laid in 2013 and at present, the Lego Cathedral numbers over 150,000 bricks, with visitors from around the world adding to this at a steady pace.

Appropriately named Open Treasure, the purpose of the campaign is to ensure that the Cathedral will remain open to the public for free for as long as possible. Also for the benefit of its donors, a world map has been included on site that records the nationalities of Durham Cathedral’s visitors, many of whom have come from all over the world, including places such as the Cook Islands, Greenland, Costa Rica and Madagascar.

Using his own personal foundation, Alwaleed Philanthropies, he intends to model this vast donation to charitable causes on a similar giving pledge made by the Bill and Melinda Gates Foundation.

Broadly, he will use his fortune to promote health and eradicate disease, to provide disaster relief and to empower women.

Speaking on his decision, the Prince remarked: ‘Philanthropy is a personal responsibility, which I embarked upon more than three decades ago and is an intrinsic part of my Islamic faith. With this pledge, I am honouring my life-long commitment to what matters most – helping to build a more peaceful, equitable and sustainable world for generations to come’.

This report is intended to provide some insights on how charitable organisations might embrace new technologies in order to revolutionise their services. However at the same time, the report also emphasises that there is no ‘magic wand’ that might be used to make these changes over night. The study aims to provide some of the answers.

Key themes to be explored

The impact of digital services

Although still in its infancy in many respects, the use of new technology has already triggered a staggering level of impact. From the use of Whatsapp to deliver new emergency health information, to low cost, 3d printed prosthetic limbs being provided for landmine victims. To realise the full potential of these sorts of ideas however, the changes made within organisations will need to be as far reaching as the technological evolutions we see on the outside.

Senior leadership must fully embrace the development of digital technology

A lack of engagement and buy-in from senior leadership was by far the most frequently cited barrier to digital technology according to the interviews conducted for this study. According to the report, this applies to CEO’s who may have mistakenly delegated the responsibility to middle management, trustees and senior executives who may not necessarily be equipped to take full advantage of it.

The speed at which the use of new technology has been advancing has creating a noticeable ‘skills gap’, the report argues, which must be filled. The key areas identified in this regard were: the use of data, digital strategy, lean and iterative process management, and also business model innovation.

According to the report, a separation between the development of digital strategy and the ultimate goal of service delivery, and impact amongst charities might be harmful. The reason for this, it is argued, is the perception that digital strategy is just another department with its own goals rather than an enabler for all. Instead, a more central organisational strategy could be used in order to benefit every department and audience group.

The age of big, corporate IT is over

In the commercial world, painful legacy systems are finally being phased out in favour of more nimble and flexible tools. Non-profits should move to adopt this same style both in terms of their IT leaderships and also in terms of the kit they use.

Non-profits are advised to start small, pick one problem and put enough effort into improving this approach, learn and then move on. A significant number of respondents advocated this ‘prototype-test-iterate’ process for transforming operations, however few of them had managed to get their organisations to adopt it at an appropriate scale.

In a period of change, funders should divert their efforts towards supporting core costs

Funders were criticised for choosing product-led investments over core-funding at a time when organisations should try to re-invent themselves from the centre outwards, the report argues. Non-profits should also be more discerning about the funding they seek in order to take full advantage of the rapidly expanding social finance market.

Move on from focusing on developing digital fundraising and marketing

While this approach has undeniably yielded results, the focus now needs to be on how digital technology can transform organisations around their core mission, which could mean moving digital teams in a different direction in order to grow expertise in other areas.

R&D programmes need to be fully implemented and organised

A greater emphasis should also be placed on integrating structured research and development activities. There are already a range of options that are low cost and low risk, but few charities have prioritised innovation

Beyond the web, a broader range of digital technologies should be brought in to achieve greater impact

While there is clearly huge potential in web-based services for non-profits, more should be done to bring together the best of these technologies and their capabilities, from sensors and trackers to wearables and AI.

As it stands, the database currently holds 572,095 records of donations with a combined value in excess of £32.2 billion. For this month’s edition of our database update, we have decided to survey the number of donations to have been recorded in the database over the past few years, and see how these numbers compare, year on year according to donor type.

Looking at the chart below, it is interesting to note that donations from the Trusts/Foundations group appear to make up the lions’ share of more recent records to have been made available (for 2012, 2013 and 2014). The reason this is interesting, is because there is a notable contrast with a similar survey we conducted in 2011, wherein we found that donations from individuals featured the most heavily in the most recent years of records included in Phi (relative to 2011 and earlier). 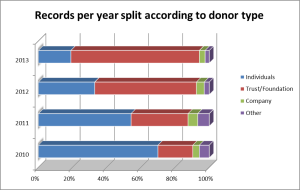 This could arguably be a reflection of both the nature of the data available, and of our data collection strategy, and while this is certainly not necessarily representative of the wider giving sector, it could indicate that donations made by Trusts/Foundations are becoming more widely publicised, or are perhaps becoming publicised more quickly than in previous years.

Founded in 1990, this foundation was established by Sir Stanley Clarke, a businessman and a philanthropist who achieved considerable success as a property developer and as a racehorse owner in later life.

Born in Burton on during the year 1933, Clarke began working from a young age in order support his family as his father, Victor Clarke, was struck down by tuberculosis.

This left his mother as the family’s sole breadwinner. Thus, from the age of nine Stanley began working a daily paper round before school, and he also undertook deliveries of medications and meat in order to help make ends meet. Sadly his father did not live long, and while Victor Clarke did at least manage to convince his son to finish school, he succumbed to his illness two years later, and died when Stanley was only eleven.

After finishing school at the age of 15, Stanley became an apprentice plumber and started his own small business, but it was not until the age of 21 that he had his first dealings in property. He began by purchasing one acre of land from a local farmer who agreed to waive the purchase price of £125 until he had gained planning permission. Stanley duly did, and then promptly sold it on for £650 and earned himself a handy profit.

This first transaction in property was significant for Stanley, as it was to be something of a forerunner to Clarke Homes, his own company, which would eventually go on to build more than 500 houses a year, making it the largest privately-owned house-building and development company in the country.

After successfully building Clarke Homes from the ground up, and after several years of rapid expansion, Stanley eventually resolved to sell the business to rival company BICC, in 1986, for a total of £51 million. As a reward for their hard work, he also shared £12 million in profits from the sale of the company amongst his employees across the country. He then focused his attention on St Modwen Properties, a second company specialising in the development of shopping centres and industrial estates rather than homes.

Aside from his business interests, Stanley was also a long time devotee of horses and horseracing throughout his life, becoming a trainer in 1961 before going on to focus on developing his own string of racehorses. He was successful in this endeavour too, when his own Lord Gyllene won the 150th Aintree Grand National.

The founding of his own charitable trust aside, Stanley was also heavily involved in several other charitable causes. On the condition of anonymity, he and his wife were private donors to various medical and religious charities, and he took up a role as Chairman of the Lichfield Cathedral Trust in 1994, where he helped to raise a total of £6m for the charity. He was also involved in a similar capacity with the Racing Welfare Charities and the Animal Health Trust.

According to Phi, the largest proportion of these donations have been made to causes associated with Health (37), followed by Religious Activities and Children/Youth (18), Welfare (10), Heritage (9), Animals (7), Education Training (4), Arts/Culture (4), Disability (4), Elderly (3), International Development (2), Rights/Law/Conflict (2), Development/Housing/Unemployment (1) and Mental Health (1).

Lady Hilda Clarke is his wife.

Mary MacGregor, Sally Hayward and Jane Gerard-Pearse are their daughters.