Welcome to the October 2015 issue of the Factary Phi Newsletter.

Shortly after reaching the formidable fundraising milestone of £1m, the Middlesbrough and Teesside Philanthropic Foundation has received a further £750,000 boost thanks to an anonymous donor.

This money is set to be distributed to a number of key community causes across Teesside, and Foundation Chairman Andy Preston described this as ‘the most exciting thing’ to happen to the charity in some time.

The benefactor was described as a ‘powerful source for good’, with the foundation promising that this latest investment will be put towards advancements in educational, employment, health, sport, social action and other community-related schemes.

An auction involving the sale of 120 individually-designed sculptures of Aardman’s Shaun the Sheep have raised the £1m for two children’s charities in Bristol.

The event was hosted by TV presenter and Sotheby’s auctioneer Tim Wonnacott, and the sculptures were exhibited in London and Bristol earlier this year as part of Shaun in the City, a public arts trail from Wallace & Gromit’s Children’s Charity.

The income from their sale is to be shared between The Grand Appeal in Bristol and Wallace & Gromit’s Children’s Charity.

Many of these are made up of donations to educational institutions in Oxford, such as Exeter College, Jesus College and St Cross College. The data also contains a number of other donations made to various causes mainly involved with the arts and the environment.

Now that the database has reached over 600,000 records, we thought it might be interesting to compare the spread of donations made by Individual Donors versus those from Trusts & Foundations to various causes throughout the database. 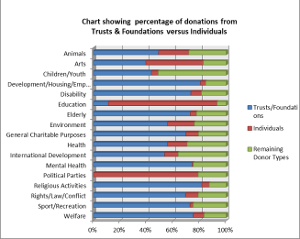 As the above the graph demonstrates, quite a large majority of donations in Phi are have come from the Trusts & Foundations donor group. This appears to be particularly true in the case of certain, specific activity types such as Sport/Recreation and Mental Health for example, where in particular, less than 1% of publicly acknowledged donations appear to have come from Individual Donors.

Elsewhere however, donations to Political Parties are, of course, overwhelmingly made up gifts from individuals but this is also true of gifts to Education. However it should be noted that the statistics are based on the results as they appear in Phi, and are not necessarily representative of the wider giving sector as a whole.

We would also like to make subscribers aware of a recent fix we were able to apply on number of Charity Commission linked donations throughout the database. You may be aware that over time, the original links for many of the older donations to have been uploaded onto the Phi database will naturally expire. However earlier last month, one of our subscribers made us aware of a large number of previously viable links which had mysteriously expired all at once. This was due to a formatting change made to the web links for a number of the ‘annual accounts’ pages on the Commission.

Happily, our links have now also been updated to reflect this change, which has restored the source pages for over 46,000 records. We’re really grateful this was brought to our attention, please do continue to let us know if you have any suggestions which you feel can improve Phi.

This foundation was formed in 1956 according to the Will of Calouste Gulbenkian, who was a British-Armenian businessman and philanthropist who made his fortune in the oil industry.

He was born in Scutari, Constantinople in 1869 but was later sent to Britain by his father where he was to be educated at King’s College London. Appropriately, he studied Petroleum Engineering and graduated in 1887 at the age of 18 with a first class degree from the university.

His father, Sarkis Gulbenkian owned several oil fields in the Caucasus and was already heavily involved in the oil industry prior his son’s birth. By the year 1860, almost ten years prior to the birth of his son, his father was a representative of Alexander Mantashev’s oil company, which would undoubtedly provide him with a valuable insight into the industry which would be passed on to his son.

It was not until 1896 that Calouste founded his own oil business, and later in 1912, he became the catalyst behind the creation of the Turkish Petroleum Company (TPC), a consortium of the largest European oil companies aimed at cooperatively procuring oil exploration and development rights throughout the Ottoman Empire and Iraq.

Aside from his business interests, he was also prominent philanthropist and a lover of art, famously amassing his own private collection of more than 6,400 separate pieces. He also donated large sums of money to churches, scholarships, schools, and hospitals in Armenia and other countries he visited during his life.

Andrew Barnett is Chief Executive Officer of the foundation’s UK branch and he is also a committee member for Healthwatch England. Previously, he has held positions as a Director and a Trustee of Addaction, as Chair of the Trustee board for DV8 Physical Theatre and People Can, as a Director of policy and communications for the Joseph Rowntree Foundation, as head of public affairs for the National Consumer Council, as group corporate affairs manager for HSBC Holdings plc and as a senior public affairs officer for the Arts Council of England. He attended the University of St Andrews.

Shreela Ghosh is an independent art consultant for the British Council and she is a former freelance consultant for the European Cultural Foundation. Before this, she worked as a professional dancer, as an actress, and as a reporter for BBC TV News. She was a Director of the Aditit national dance agency, Arts & Heritage and the Esmee Fairbairn Foundation.

Sita Popat is a professor in performance and technology for the University of Leeds. She has lectured on the subject of dance at the University since 2001, which she also attended, and graduated from it the same year.