Welcome to the November 2015 issue of the Factary Phi Newsletter.

Veterans Aid is set to benefit from a £1.7m donation from London mayor Boris Johnson.

Speaking about the donation, Veterans Aid CEO Dr Hugh Milroy said, ‘We are delighted to receive this funding which couldn’t have come at a better time. The £7m refurbishment and upgrade of our flagship hostel, New Belvedere House, is the largest single investment of money, human resource and community engagement in our 83-year history and we are still £1m short of our target’.

‘The Mayor’s commitment to tackling this issue resonates with our own pledge of ‘No first night out’ for any veteran in crisis. This further evidence of City Hall’s commitment to supporting our work is heart-warming and will take Veterans Aid several steps nearer to building on success and delivering a world class facility’.

Dr Margaret Langden has left the bulk of her £2m to fortune to charity after passing away in February of this year following a short illness.

She lived to be 96 years old, and after graduating from George Watson’s where she studied medicine, she began working as a locum doctor in Tobermory. Later she worked in the public health field and she was lastly the Chairman the South Lothian Hospital Trust until her retirement.

The charities set to benefit in her will are The Royal Medical Benevolent Fund, Age Scotland, Cancer Research UK, Macmillan Cancer Support, The Royal National Lifeboat Institution (RNLI), the University of Edinburgh Development Trust, George Watson’s College, which she attended, and her local Murrayfield Parish Church.

A friend of hers commented, ‘She was a trailblazer for women in her profession but lived a very private life. She was committed to helping others and that is reflected in the legacies she has left in her will.’

Speaking on the creation of the new fund, he said, ‘300,000 people have signed a petition arguing that no VAT should be charged on sanitary products. We already charge the lowest per cent rate allowable under European law and we’re committed to getting the EU rules changed.

Until that happens, I’m going to use the £15m a year raised from the Tampon Tax to fund women’s health and support charities’.

Initial donations worth a total of £5m are to be made to four charities – the Eve Appeal, SafeLives, Women’s Aid and The Haven. He also invited ‘bids from other such good causes’, and has indicated that a further set of donations from this fund will be announced in the first budget of 2016.

This month, we have included a summary of a recent report documenting the demands and challenges that local charities and community groups are facing in the current environment.

It is entitled the ‘Local Charity and Community Group Sustainability Report’ and was authored by Lewis Garland and Louise Coady. The report was published by Local Giving (www.localgiving.com).

The purpose of this report, it is stated, is to give an insight into the hidden world of smaller charities, so that some of their most pressing issues can become more fully understood and resolved.

The point is also made that while there has been a good deal of excellent research conducted on various aspects of the UK Charity Sector, such as the effects of the recent economic crisis, the use of digital technology and staff pay, there has not yet been a notable survey which focuses specifically on the UK’s ‘local’ voluntary sector.

For the purposes of the report, the survey’s eligibility criteria was that participating groups must operate within the UK and these must not be national, or transnational charities in terms of the work they carry out.

There were a total of 538 responses to the survey from various organisations. 72% are registered charities.

According to the responses, a significant number these organisations have begun to genuinely fear for their mid to long term survival. As a result of the financial crisis income levels were reportedly stagnating, with large numbers of charities facing closure, and only a tiny percentage of these groups reportedly being able to prioritise building their reserves over their running costs.

The demand for the services of local groups has grown significantly in recent times, which in turn has stretched the resources of many charities to their limit. The reason for this, it is stated, is because of the obviously negative impact austerity measures have had upon the people who rely on the services of smaller charities, coupled with the ever-shrinking influence of the state sector. The strain of meeting this heightened demand for their services appears to have prevented many of the smaller charities from addressing their longer-term financial issues.

Despite regular discussions and widespread agreement on the need to diversify funding, there is still an over-reliance on single funding sources. Indeed, half of all respondents stated that grants remained as their primary source of income. They also expected this to remain the same in the coming financial year, however, 83% cited competition for limited grants and contracts as a major financial concern for them in the future.

From the public’s perspective, there seems to be a widespread lack of awareness regarding charities and the work they do. While 83% of groups felt that their local community appreciated the work of local charities, only 37% felt that this was appreciated by the general public, and only 10% felt this was appreciated by local government. In addition, 45% also reported that no-one had fundraised on their behalf over the last 12 months, with many groups reporting that finding volunteers was a major challenge.

According to the responses, there is not only a lack of core competencies across the sector, but this is also compounded by a shortage of reliable and appropriately skilled volunteers. 83% of respondents cited a lack of specialist fundraisers, while 86% stated that they do not employ specialised marketing staff. Furthermore, only 26% said that they believe they currently have the skills to run a successful fundraising campaign and 47% cited budgetary constraints as the main barrier to providing training.

There are a number of clear regional differences between local charities within the sector, many of which reflect wider economic and social issues, the report states. For example, 33% of London-based groups cited the rising cost of rent as a concern, compared with just 8% in the South West of England. More than 53% of groups in the Midlands expressed concerns over a lack of reserves, compared with 33% in the South East of England. It should be noted that despite its best efforts to engage a representative sample, the survey’s respondents were heavily weighted to the South of England, with only 6% of groups operating within Scotland, Wales and Northern Ireland.

Collaborative working is considered to be standard practise for local charities and community groups. 53% had worked with a local business over the last 12 months, 80% with another non-profit organisation, and 72% with their local authority.

Finally, the report stresses that while the local voluntary sector covers a diverse range of causes, there are a number of shared characteristics between different organisations. Primarily, local charities consider their key strength to be their ability to develop strong, trusting relationships with service users and their understanding of their needs. As well as this, the majority of local organisations are also relatively small, with 95% listing an annual income of £1m or less. A significant percentage of these also focus on health and wellbeing (14%) or disability (13%).

As it stands, the database currently holds 604,619 records of donations with a combined value in excess of £32.9 billion. For this month’s edition of our database update, we thought it might be interesting to survey the spread of records which include an amount (£) throughout the database.

The bar chart below shows the total spread of donations with amounts throughout Phi, split according to donation banding. 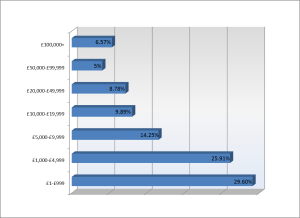 Based on the above graph, it appears that the lion’s share of donations to have been made visible in the public domain (at least with a listed amount) have been made in the under £999 or under banding overall. As you might expect, the total share of donations with an amount gradually decreases in Phi as the banding becomes larger, except in the case of £100,000+ records, which have a slight edge on the £50,000-£99,999 bracket overall.

We conducted a similar survey of Phi in 2010, which for reference, we thought it might be interesting to include below:

Founded in 2007, this foundation was established by Heather and David Stevens with the intention of supporting global projects associated with the environment and child development. It takes its name from the Waterloo district of London, where the founders first met.

Heather and David made their fortune in the insurance industry, where the pair were a part of the small team that originally launched the insurance group Admiral in Cardiff, 1993. Since that time, the company has grown to become one of the largest private sector employers in Wales, and in 2004, it was floated on the Stock Exchange.

Their foundation was subsequently established, and it was originally endowed with shares in the Admiral Group plc worth £99m.

According to Phi, the largest proportion of these donations have been made to causes associated with Education/Training (20), followed by Environment (12), Health (10) and International Development (10), Children/Youth (3), Disability (3), Welfare (2) and Rights/Law/Conflict (2), Development (1), Animals (1), Religious Activities (1) and Mental Health (1).

David Stevens is a co-founder and Chief Operating Officer of the Admiral Insurance Group. Based on this, he is featured on the Sunday Times Rich List 2015 with an estimated wealth of £168m. He has been with the company since its foundation in 1991, and was part of its original management team. He currently runs its UK arm, and is set to take over from Chief Executive Officer Henry Engelhardt in 2016. Before working for Admiral, he held positions in McKinsey & Co’s financial interest group and also with Cadbury Schweppes in both the UK and USA. He is a Trustee of the Institute of Welsh Affairs.

His wife, Heather Stevens is also a founder of the Admiral Insurance Group and is also featured on the Sunday Times Rich List with an estimated wealth of £168m. Earlier this year, she was High Sherriff of South Glamorgan and she is also a Trustee of the Ocean Watersports Trust Vale of Glamorgan, Size of Wales and the National Botanic Garden of Wales.

Caroline Oakes is a co-owner of CliveWood Alpacas and she is also a Director of MIPD. Before this, she was a member of the Telford & Wrekin Council and she is also a former team leader for the Community Council of Shropshire.

Janet Alexander is an administrative secretary for British Association for Cancer Research. She is a former senior clerk for the University of Leeds and she attended the Open University.