Welcome to the May 2016 issue of the Factary Phi Newsletter.

The late actor is reported to have left several donations to named charities his will, after passing away earlier this year aged 69, after a battle with cancer.

The Royal Academy of Dramatic Art, Sponsored Arts for Education, the Facial Surgery Research Foundation and the International Performers Aid Trust are all reportedly set to benefit from a £25,000 donation each.

As an aspiring actor, Rickman was a student at the Royal Academy of Dramatic Art shortly before beginning his stage career. He also served as a patron of Saving Faces in the year 2000, and he was an honorary President of the International Performers Aid Trust.

Energy giant ScottishPower have reportedly been issued with a hefty fine by regulator Ofgem after the firm were found to have fallen foul of customer regulations.

The company will now face an £18m penalty after receiving over one million complaints of poor customer service between June 2013 and December 2015. £15m in fines will reportedly be paid back to ScottishPower customers, and a further £3m is to be donated a number of charitable causes.

This is the third largest penalty to have been levied by Ofgem to date.

Relative to previous editions, the findings of its most recent survey are generally positive. The two measures of philanthropic income have shown a healthy increase, and it is thought that there may be an emerging trend of larger donations being made by a relatively flat number of donors, which could perhaps reflect a renewed concentration from universities on major gift programmes.

In terms of the makeup of donations made to universities, their income consisted fairly equally of gifts from both individuals and organisations. However when individual gifts were excluded from the analysis, by far the greatest proportion of university income from organisations was found to have come from the trusts and foundations donor group. This is significant, because donations from this group make up only 2% of the total number of donors overall, which demonstrates their huge importance of this donor type to the higher education sector as a whole.

Elsewhere, while corporate donors do make significant contributions to universities in other ways (commissioning research, developing sponsorships & partnerships etc.) the level of philanthropy as defined by the survey is relatively modest in comparison (around 6% of the cash income received).

As is to be expected income from alumni still makes up the majority of individual gifts, which demonstrates the importance of the relationship between universities and their alumni.

According to the report, there remains some significant variance between across the sector; however the trend data has shown some evidence of widespread growth. More and more institutions are securing £10m or more in new philanthropic funds and more universities are also breaking the £1m barrier in terms of their philanthropic income.

Investment in fundraising and alumni relations

Since 2013 the Ross-CASE survey has consistently found five clusters of reporting institutions which share similar characteristics. These groups are classified by the report as Elite, Established, Moderate, Emerging and Fragile, and all of these have remained fairly stable over the past three years.

During the course of this month, just under 10,000 new records of donations have been uploaded onto the Phi database. This brings us to a total of 678,452 records of donations overall, with the latest upload containing donations made to a variety of UK universities, including St John’s College, Somerville and the University of Strathclyde.

Given the significant number of university donations to have been included this month, we have decided to survey all donations that have been made to Universities across the database, and to see how these compare in terms of donation frequency and value.

Where an exact donation amount was not included, we have instead used ‘gift band lower’. Those records which do not include an exact amount or those with only a ‘gift band upper’ have been excluded from the survey.

At present, there are a total of 214,401 records of donations in Phi that have been made to causes which include ‘University’ in their recipient name. This represents just over 30% of all records contained in Phi, with a minimum value of just under £3bn.

Below, we have included a bar chart showing donations to have been made to Universities according to their value, split according to various donation bandings (£). 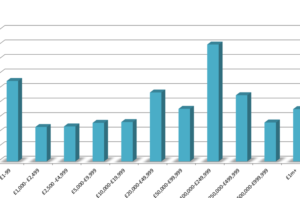 As is demonstrated by the graph, there is a noticeable spike of donations in the £1-999 bracket, which could perhaps be indicative of the large number of donations that are regularly made by former students who wish to remain connected to the universities which they attended.

Outside of the smallest banding, there is a gradual increase in frequency of donations as the size of the banding also increases. This peaks at the £100,000-£249,999 mark, which is the most populous by a significant margin.

It should be noted that the statistics are based on the data as it appears in Phi, and it is therefore not necessarily representative of the wider giving sector as a whole.

The trust was established in 1937 by the philanthropist Arthur Kinmond Bell, who was a Scottish distiller and the owner of the family run Arthur Bell & Sons Ltd.

Arthur or ‘A K’ as he was known joined the family business in 1895, where he would quickly make his mark alongside his younger brother Robert. Under their influence profits at Arthur Bell & Sons were doubled and as a result, Arthur was made head of the company after their father’s death in 1900.

As the family’s eldest, Arthur served as the Managing Director of Arthur Bell & Sons Ltd where he would lead an impressive expansion of the company during both the Great Depression and through the Prohibition era of the United States. His success was achieved in a large part due to the shrewd usage of advertising and agents, many of whom were members of his extended family living throughout the British Empire, and Arthur also presided over the friendly takeover of three other distilleries between 1933 and 1936.

Years later, he singlehandedly saved the Perth linen industry by backing the one remaining company based in the area, an act that saved 300 jobs in the city and that also landed him the honour of the freedom of Perth.

As a philanthropist his first major project was the building of the Gannochy Housing Estate between 1924 and 1932, a model housing scheme that was set up to benefit the younger generation in the city. In 1937 he also established the Gannochy Trust, partly to maintain the Gannochy estate and partly to ensure the continuing improvement of his native city after his death.

He died unexpectedly in 1932. However in his will, he gifted 3 senior employees of Arthur Bell and Sons the sum of £5000. He also gave £500 to all company’s staff with 10 years experience, and £200 to all gardeners, chauffeurs, and servants who had been in his employ for ten years or more.

The highest proportion of these have been made to causes associated with Children/Youth (63), followed by Arts/Culture (38), Environment (21), Heritage (19), Religious Activities, Education/Training and Health (16), Disability (14), Welfare (13), Development/Housing/Employment (11), Sport/Recreation (9), Animals (7), Mental Health (6) and General Charitable Purposes (3).

Dr James Kynaston is Chairman of this trust.

Ian McMillan is Chairman of the Scottish Hydro-Electric Community Trust and he is also Vice Chairman of Perth Housing Association.

Dr John Markland is a director of Horsecross Arts Ltd. Previously he was Chairman of Scottish Natural Heritage and he was Chief Executive of Fife Council.

Jane Mudd is a Partner, leadership development facilitator and a workplace coach for the Mudd Partnership. Before this she was an associate for the Edinburgh Institute and for Solace Enterprises, she was an interim training manager for the Mental Welfare Commission for Scotland, she deputy Chief Executive Officer of railroad manufacturer SLF, a project officer for COSLA, a senior executive for Scottish Enterprise and she was a project officer for the Scottish Qualifications Authority.