Welcome to the October 2016 issue of the Factary Phi Newsletter.

In their largest charity donation to date, the Edinburgh Military Tattoo has raised £1m from three spectacles held at Edinburgh Castle and also at two other locations in Australia and New Zealand.

The money raised represents double the grants made last year in 2015 and brings the total distributed by the charity, since it was established in 1950, to over £9m.

A range of UK charities are set to benefit this year, including ABF – The Soldiers’ Charity, The Royal Navy and Royal Marines Charity, The RAF Benevolent Fund, the Royal Commonwealth Ex-Services League, Combat Stress, Seafarers UK and the Venture Trust. Combat Stress will also reportedly receive a donation of £90,000.

Sue Freeth, of Combat Stress, said that their donation will help ensure that veterans are ‘given the tools they need to recover and go on to lead fulfilled lives’.

Businessman Anthony Wild has donated over £1m to the chemistry department of the University of York.

His gift is to be used to support world-leading research on atmospheric chemistry and chemical and structural biology, and furthermore, he has also pledged to donate a further £1.3m against funds raised by the Department of Chemistry and the University over the next five years.

Vice Chancellor and President, Professor Koen Lamberts, said: ‘The support from Dr Wild really does transform what we do here at the University of York.‘

‘It helps us to raise our aspirations and unlock other sources of funding for our research and teaching.‘

This month we have included our summary of the NCVO’s financial sustainability review of the voluntary sector. The report was co-authored by Michael Birtwistle and Andrew O’Brien.

Unfortunately, the results of the review are not good, with the statistics suggesting that the voluntary sector’s funding has stagnated over the last five years. The aggregate figures also appear to mask a significant redistribution of the sector’s spending power from smaller to large organisations.

Smaller charities have not benefitted from the economic recovery, and they are experiencing what the report refers to as a ‘capacity crunch.’ With the squeeze negatively affecting their ability to adapt and engage with funder programmes that are designed to improve their sustainability.

Since 2009/10 income from government contracts has fallen, in spite of positive developments like the Social Value Act review and government contract transparency clause pilots, some significant barriers remain for those charities that wish to engage with public service contracting.

Government grants are at an all-time low, and while donations have recently recovered to pre-recession levels, the significant growth of income from individuals appears to have been driven by fees charged by charities for services. The report argues that relying on this as a source of income is unsustainable and could even undermine the overall mission of charities in some parts of the sector.

Surveys of the sector have shown a consistent year on year rise in the demand for charitable services, however, the exact details regarding this new level of demand have not routinely been collected or published. To combat this, charities are advised to better develop their ability to measure and communicate the level of demand for their services.

The price of everyday services that are commonly used by voluntary organisations has risen significantly, often above inflation. At the same time support from local authorities and other public bodies has also been cut due to budget pressures, which has made the availability of existing tax reliefs increasingly important.

Despite the significant pressures, effected charities have responded by increasing the proportion of their spending on charitable activities, and foundations have also increased the amount of grant funding to other charities.

Staffing resources have been stretched and cutbacks have also been made on upgrades and training.

Voluntary sector assets have not yet recovered to their pre-recession value, and the recovery in asset value that has been made has not been uniformly distributed across the sector. The sector has been forced to use reserves to cover operational costs, leaving it in a more fragile position. Without a significant improvement in its funding environment, it is thought that it could experience a delayed impact from the recession.

Falls in asset values during the recession have contributed to a relative increase in the sector’s pension liabilities that has not recovered with more recent asset growth. Despite this however, many charities have sought to use their assets to generate additional income, and thus far there has been no significant increase in organisations seeking or securing social investment.

The combined effect of current forecasts is a £4.6bn annual shortfall in overall sector income by 2018/19, simply in order to maintain its 2012/13 spending power.

On the basis of current trends, the only source of sector income that is significantly growing (individuals) will not rise enough to make up for the fastest falling source of income (government). Furthermore, inflation is expected to reduce the sector’s spending power by £3.1bn by 2019/19 which will further squeeze its capacity.

In larger charities and foundation endowments, a slow recovery of the sector’s assets base is likely to be realised, however this rise in assets is not expected to make up for income loss elsewhere.

Sector organisations are increasingly generating their income through charging for their services, however this is approach should not be considered suitable for all organisations. They must ensure that any effort to generate income does not undermine their ability to achieve their objectives.

Around £1.7bn of government income has been lost since 2009/10. In light of this, organisations must ensure that they are in a position to win government grants and contracts, whether this is through improved collaboration, demonstrating their impact or finding new ways of delivering services. With that said however, change is also needed from the government in order to make this possible.

Recent surveys and research suggests that there has been a significant increase in the demand for charity services. Organisations will need to take additional steps in order to ascertain the level of demand and what resources will be required to meet the public need. This in turn should be held to enable a more focused debate regarding the sector’s finances and better inform discussions.

In order to address the recent ‘capacity crunch’ of their back-office and management resources, charities will need to think ahead and consider how they balance their short term demand for services with long term sustainability.

Organisations should consider doing more to spread the lessons gleaned from others that have adapted and become more sustainable. With that said however, it is important to recognise the limits of replicating a ‘one size fits all’ model.

According to the research, organisations will need to make over £3bn in efficiency savings in order to maintain their spending power. They also need to make explicit the impact inflation will have when bidding for contracts and grants.

Charitable foundations now account for an increasingly important part of the sector’s income given the recent reductions in grant funding from the government, and in light of this, they may need to reconsider their role as strategically important funders for the sector as a whole. More co-ordinated or different approaches to funding the sector may be necessary to compensate for this loss in government income, for example for capacity building.

During the course of this month, a little over 10,000 new records of donations have been uploaded onto the Phi database worth in excess of £233m.

This brings us to a total of 708,630 records of donations in Phi overall, with the latest upload containing donations made to a variety of different community organisations and charities.

For this month’s edition of our Database Update, we thought it might be interesting to survey the latest data to have been uploaded onto the database. We have included a breakdown of these donations according to their activity type, featured below. 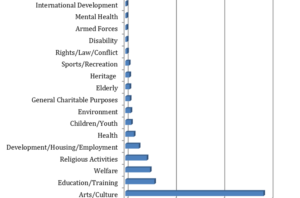 This trust was established in 1977 by Henry Moore, who was an English sculptor and visual artist.

The son of a coal miner, he was well-known for his distinctive carved marble and larger-scale abstract cast bronze sculptures. Later in life he became extremely wealthy due to his ability to fulfil large-scale commissions, however he chose to live modestly, with most of the money he earned going towards endowing the Henry Moore Foundation.

His reputation was such that by the end of his career in 1982, he was considered to be the world’s most successful living artist at auction. He died in 1986 aged 88. His trust was established in order to encourage public appreciation of the visual arts and to promote his own works in particular.

The highest proportion of these have been made to causes associated with Arts/Culture (136), followed by Education/Training (16), Heritage (8), Environment (2), Religious Activities and Rights/Law/Conflict (1).

Antony Griffiths is an Oxford Slade Professor at the University of Oxford and he is also a Trustee of the National Art Collections Fund and Print Quarterly Publications.

Nigel Carrington is Vice-Chancellor of University of the Arts London. Before this he was an international lawyer with Baker & Mckenzie and he was also formerly the Managing Director and Deputy Chairman of the McLaren Group. He is a Trustee of Dreamchasing and Universities UK.

David Wilson is an art dealer specialising in European sculptures and pictures from the 16th to the 20th century. He was formerly a practising solicitor who qualified with Farrer & Co.

Celia Clear is a non-trustee advisory board member for the Art Fund.

Peter Wienand is the head of the IP & Commercial Team and the Museums & Galleries Group for Farrer Solicitors, where he is also a Partner.