Welcome to the November 2016 issue of the Factary Phi Newsletter.

Newman’s Own Foundation to donate £175k

The foundation of late actor and philanthropist Paul Newman is set to donate around £175,000 to 19 children’s charities in the UK.

His foundation is funded through all profits and royalties from Newman’s Own, a non-profit food company he set up in 1982 in order to fund his charitable endeavours.

Charities such as Amaze, The Ministry of Stories, Manchester Young Lives, the OYAP Trust and the Hackney Empire are all set to benefit.

Susie McKenna, who is Hackney Empire’s Creative Director said: ‘The Newman’s grant has been invaluable to us, allowing us to bring in specialised staff needed to support the young people who attend the group. It’s vital we create a safe space that allows young people to grow and be creative – the funding helps us to create this environment’.

The organisation has found success in a recent bid for funding from LIBOR banking fines.

This marks the second time the Wales Air Ambulance Charity has applied for and received funding through LIBOR banking fines, after first receiving £1.5m towards a helicopter upgrade in 2015.

WAAC’s chief executive Angela Hughes said: “It’s the charity’s vision to become a 24-hour operation and this donation from the LIBOR fund takes us a step closer to reaching that goal.

The money will go towards increasing its flying hours and the charity’s plans for night operations.

This month we have included our summary of the CAF 2016 World Giving Index. In 2016, this is the seventh edition of the report.

The aim of the Index is to provide an insight into the scope and nature of people’s charitable giving around the world. As part of its research, the report looks at three key aspects of giving behaviour in order to rank the populations of 140 different countries. People were asked if they have:

As was also the case in previous years, more than nine out of ten people in Myanmar had donated money in the month prior to interview, which accounts for its ‘very high’ score on the World Giving Index ranking. Aside from maintaining its number one spot in the overall rankings, Myanmar’s overall score is also up from the previous survey held in 2015. It is thought that this new, even higher score can be attributed, at least in part due to the influence of Theravada Buddhism, which is widely practised in the country. According to which, charitable donations and a monastic lifestyle are encouraged. Further, its most recent score could also be a result of the widespread sense of optimism ahead of the country’s first democratic elections held in November 2015.

At a global level, helping a stranger continues to be the most common way to give

For the first time in the history of the Index, more than half of the people who were globally surveyed helped a stranger in the month prior to interview, which demonstrated a positive movement in its measure of generosity. Encouragingly, participation levels in this act have reportedly increased at all economic levels of society, even in transitional nations.

Generosity in times of diversity

According to the report, people are continuing to exhibit signs of generosity in times of adversity. For the second year running, Iraq occupies the number one position in terms of helping a stranger, despite an ongoing civil war, and Libya has also improved in this regard. It appears that this might be happening as a reaction to both countries increasingly fragile civil societies, coupled with greater need for support across their populations.

At a continental level, Africa’s 2016 score is higher than its five year average for all three giving behaviours – an achievement that is also shared by Asia. Africa also holds the most improved overall World Giving Index score this year, and it has never been higher.

To reiterate the Index’s previous recommendations, Governments around the world should:

For this month’s edition of our Database Update, we thought it might be interesting to survey the makeup of each of Phi’s activity types according to donor type.

The most widely recognised donor types listed in Phi are Individuals, Trusts/Foundations, Companies and Other Grantmaking Bodies. Whilst there are also several others donor types, it should be noted that for the sake of simplicity any donations made by Patrons, Celebrity Supporters/Ambassadors, President/Vice Presidents and Trustees are counted as Individual donations for the purpose of this survey.

The bar chart below illustrates the overall spread of donations into each category split according to donor type. All records throughout the database have been surveyed, representing donations recorded in Phi from the years 2006 to 2014. 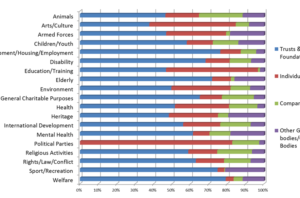 As the chart above demonstrates, the lion’s share of donations made in almost every activity type have come from the Trusts/Foundations donor type, with one or two exceptions.

The Political Parties activity type is is largely dominated by Individual Donations, for obvious reasons, but elsewhere, Arts/Culture also bucks the trend with a slightly higher proportion of donations (46%) coming from Individuals overall, and the same is also true of Education/Training donor type with 51% of all donations coming from this group.

This trust was established in 1962 by Lord Max Rayne, who was a successful property developer and investor based in London.

After completing his service with the RAF during the Second World War he joined his father’s clothing business. From here, he organised sub-leases on its premises in order to finance new land and property developments in bomb-damaged central London.

During his life Rayne also served as a Chairman, Trustee and council member of several charities. He was Chairman of National Theatre and St Thomas’ Hospital. He also remained as chairman of the Rayne Foundation until his death in 2003.

His widow, Lady Jane Rayne is a daughter of the 8th Marquess of Londonderry and sister of Lady Annabel Goldsmith. She is a Trustee of The JFR Charitable Trust.

Rabbi Baroness Neuberger is a Senior Rabbi to the West London Synagogue and a member of the House of Lords. She is also currently deputy Chair of the Van Leer Group Foundation, and a Trustee of Me Too, the Van Leer Jerusalem Institute, The Lyons Learning Project, Walter and Liesel Schwab Charitable Trust and The Social Market Foundation.

Lady Browne-Wilkinson is a former solicitor and a Board member of GuideStar International and the Wigmore Hall Trust.

Professor Dame Margaret Warwick is Emeritus Professor of Medicine at the University of London. She is a Trustee of The Parkhouse Award.

Professor Sir Anthony Taylor is the President’s Envoy for Health at Imperial College London. He is a Trustee of The Colt Foundation.

Robert Rayne is a son of Max Rayne. He is Chairman of Derwent London plc, a senior non-executive director of Weatherford International and a director of LMS Capital plc.

Natasha and Nicholas Rayne are the children of Lady Jane and Max Rayne.

Sir Emyr Parry is a former Ambassador to the United Nations, the President of the Learned Society of Wales and Chair of Redress. He is also a Trustee of Prifysgol Aberystwyth and the Wales Millennium Centre.

We use cookies on our site – currently we operate an ‘implied consent’ policy which means that we assume you are happy with this. More info