Welcome to the January 2017 issue of the Factary Phi Newsletter.

Alongside his wife Isla Fisher, the comedian and actor Sacha Baron Cohen donated £100,000 to the Sunday Times Christmas Appeal.

Their contribution will go towards the support of several health clinics and a damaged maternity hospital in the Syrian city of Idlib.

“The shameful inertia of the UN security council over the past five years has helped give the Assad regime free rein to commit war crimes, including the intentional bombing of hospitals and the torturing to death of thousands of men, women and children whilst in detention,” said Baron Cohen and Fisher.’

‘Their donation contributes to the Children in War Appeal which had, by 1st January, raised over £1.5m for families affected by war in Syria, Iraq and Yemen. More than half of this had been donated by Sunday Times readers through the Christmas Appeal.

The legacy of the reclusive Scottish finance and property investor Basil Death is to be given away for the benefit of local schools, the Roman Catholic Church and military charities.

According to friends, his will was set up in order to ensure that Theresa Wade, his housekeeper of almost 60 years, would be able to benefit from his wealth and would not have to face financial hardship after he had gone.

His will also stipulated that in the event of her death, a trust fund would then be established so that the remainder of his fortune can be distributed to charitable causes.

Local charities and projects can now reportedly apply for grants of up to £3,000.

This month, we have included our summary of a recent report on social investment as it relates to small charities. The report was written by Leila Baker and Niamh Goggi on behalf of the Institute for Voluntary Action Research.

The aim of this report is to draw attention to many of the common challenges faced by small to medium sized charities. Of course, whether these challenges are related to governance, finance or policy, few organisations see social investment alone as a solution that will enable them to continue to fulfil their mission and achieve their goals.

There are, however, those who can conceive of a time where loans might form a portion of a diversified funding portfolio alongside grants and donations. For this to become a reality however, there needs to be a significantly improved communication of the key components and requirements of the social investment process.

A successful partnership would require:

A thorough assessment that will enable investors to understand the social and financial potential of the charity applicants, including the role they play in their communities and the capacity of investment to strengthen its resilience and impact.

This could for example lead to an investor choosing to support an application for social investment from a charity that is very likely to struggle with the application process, because this could be the difference between the charity surviving or failing.

Commitment, persistence, time and a willingness to acquire new skills are all required and must be underpinned by a dedication to the organisation’s core mission and its beneficiaries.

Financial products must be tailored to what the charity actually needs in order to achieve its mission, rather than to help build the social investment market and to generate more demand.

In some situations, charities may require a range of financial products and services, similar to those provided by banks and other financial intermediaries to small businesses. Overdrafts, working capital, leasing, factoring, commercial mortgages etc.

It is thought that many of the problems arising from forming such a partnership can be addressed, firstly, through simply improving lines of communication. It is important to remember that most charities will have never been through this process before, and are essentially piloting it for their own organisation. Secondly, they can also resolved through a deeper understanding of the drivers that lead charities to engage with social investment in the first instance.

Charities are driven by their mission first and foremost, and they will therefore appreciate working with social investors whose values are aligned with their own.

Ideally, charities want to develop good relationships with social investors rather than just experience one good transaction. A ‘good relationship’ can be defined as a relationship with an investor who understands and supports their social purpose and who wishes to foster a partnership on a long term basis.

A good relationship is also underpinned by the lenders ability to judge whether a charity’s finances are stable based on a realistic assessment of their current operating environment and the level of uncertainty that most charities currently live with.

If the demand for social investment is driven by necessity stability and development, national and local outreach and marketing should reflect this reality, rather focusing primarily on impact and scalability. Similarly financial products, outreach and marketing should be driven by charity need rather than for its own sake, or investor market-building.

Changes in local authority commissioning and contracting mean that many smaller charities have found themselves at the end of a long supply chain. This increases risk, and therefore requires the generation of surpluses to fund reserves and working capital.

For this month’s edition of our Database Update, we thought it might be interesting to survey all donations to have been made by donors categorised as Companies throughout the database. 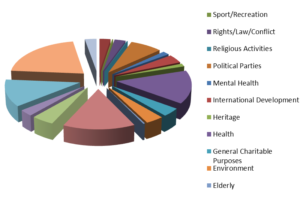 As the chart above demonstrates, the most frequently supported activity type by corporate donors is Arts/Culture, followed by Health and Education/Training.

Below, we have included a separate chart showing the number of corporate donations throughout Phi, split according to donation size (£).

This trust was formed in 1961 by Elspeth, Agnes and Ethel Robertson, all of whom are granddaughters of William Robertson, who was the founder of one of the largest private companies in Scotland.

Their company, now known as Edrington, owns a number of well-known whisky brands, including The Macallan, Highland Park, The Famous Grouse, Cutty Sark and Brugal.

The Robertson Trust was reportedly established by his granddaughters so that the family could continue to extend their past support to the charities that are close to them.

Dame Barbara Kelly CBE is a Scottish civil activist who currently holds positions as a Trustee of Peter Pan Moat Brae Trust and as the Honorary President of the Dumfries and Galloway Arts Festival, the Crichton Foundation and the Southern Uplands Partnership. She is Chairman of this trust.

Shonaig Macpherson CBE is a governor of the Royal Conservatoire of Scotland, Chairman of The Royal Lyceum Theatre Company and she is a non-executive director of Future Learn and Euan’s Guide Ltd. She is Vice Chairman of this trust.

Mark Laing is retired. He is the former Chairman of Nairn’s Oatcakes and he is a member of the Court of Queen Margaret University.

Heather Lamont is the client investment Director of the CCLA. She has held this position since 2008 and she has formerly employed in the charities business development department of HSBC Global Asset Management, she was an audit manager for Kingston Smith and she was the Editor of Charity Finance magazine until 2003.

Andrew Walls is Finance Director of Offshore Renewable Energy Catapult. Prior to this he was Finance Director and group company secretary of Quayle Munro Holdings Limited and he was also formerly interim finance manager of Franklin Templeton Investments, interim director of finance at Macaulay Land Use Research Institute, he was the Principal consultant of Galvanise Consulting Limited, a senior manager at Price Waterhouse Cooper and he was an audit manager at Coopers & Lybrand in Johannesburg.

Lorne Crerar is a founding Partner and executive Chair of Harper MacLeod and Chair of Highland and Islands Enterprise.