Welcome to the April 2017 issue of the Factary Phi Newsletter.

Insurer More Than are to donate £1m to the RSPCA, making good on a pledge to donate £50 from every pet insurance policy taken out with them since 2014.

The company will also donate six weeks of free cover for every dog and cat rescued from an RSPCA centre with an additional £20 for each renewed policy.

Chris Bainbridge, who is a pet product manager for More Than said: ‘We always try to encourage responsible pet ownership through our campaigns so having the RSPCA as our charity partner is a great fit’.

Motto in the Community to donate £100k

The charitable arm of Motto Hospitality is to donate £100,000 to The Woodland Trust.

The money will go towards the creation of three Centenary Graves at Langley Vale in Surrey, Dreghorn Woods near Glasgow, and Ffos Las in South Wales.

Karl Mitchell, who is the Director of fundraising at the Woodland Trust, said: ‘We are delighted that Motto In the Community has chosen to support the Woodland Trust through carrier bag donations. The cheque for £100,000 is just fantastic and will allow us to plant thousands of trees on our First World War Centenary Woods sites.’

‘This money will create a living legacy for the heroes who lived and served in the war, as well as bringing a massive boost for nature. A big thanks to MITC’.

This month we have included our summary of several chapters of the Charities Aid Foundation’s UK Giving Report 2017. Our summary includes the report’s key findings and some interesting information on the impact of Brexit. The full report is intended to provide an overview of charitable giving in the UK.

This report has been produced annually from the year 2004 to 2017. In that time, there have been a number of adjustments made during the process which affect not just how the study is approached by its researchers, but also the type of questions that are asked of its respondents. For example in this year’s edition, the decision has been made to move to a monthly tracking study rather than conducting interviews at four different points spread throughout the year.

Starting from May 2016, the methodology of the report has also been altered, which has allowed for more than double the number of interviews (from 4,000 to 8,000) per year, and it is thought that from next year, this will have increased even further to 12,000 interviewees.

The upshot of these changes is that responses can now be considered to be representative of a full calendar year, and thanks to its new sample sizes, the UK Giving report is now considered to be the largest study of giving behaviour that is freely available to charities.

The report’s key findings for individual giving in the UK are as follows:

People who voted to Remain were found to be more likely to participate in every charitable or social action than those people who voted to Leave. The only exception to this was the question of giving goods to charity (58% for both groups).

For this month’s edition of our Database Update, we thought it might be interesting to survey the composition of all data throughout database, split according to donor type.

The bar chart below shows the makeup of four of the largest of Phi’s activity types, with each bar split to show the number of donations per activity type and the overall value each, relative to each other. 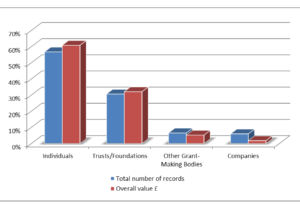 As the graph demonstrates, Individual donations make up the largest proportion of donations throughout the database both in terms of their numbers (411,000 records) and in terms of their overall value. This is followed by the Trusts/Foundations donor type with 220,000 records, Other Grantmaking Bodies with 47,000 and finally Companies, with just over 43,000 records.

It should be noted that for the sake of accuracy, donations with only a ‘gift-band lower’ have been excluded. Several exceptionally large individual donations (taken from the Sunday Times Giving List) have also been excluded.

This trust was formed in 1996 by Lady Hilda and Sir Maurice Laing. He was a senior executive in the construction company John Laing plc and he was also the first president of the Confederation of British Industry.

The youngest son of John Laing senior, he joined the family construction firm in 1935 aged 17. He would later serve as an airman during the Second World War, before returning to the family business in 1945. He was the deputy to his brother Kirby, who was Chairman of the company until 1976 (and who established the Kirby Laing Foundation in 1972 which had an income of over £2m last year). The brothers would then swap positions, with Maurice eventually retiring from the company as its life President in 1982. He died in 2008.

Factary Phi holds 46 records of donations made to various organisations since 2006. According to Phi, the largest proportion of these donations have been made to causes associated with Religious Activities and International Development (11), Welfare and Development/Housing/Employment (6), Children/Youth (5), Health (3), Education/Training (2) and finally Disability and Arts/Culture (1).

Stephen Ludlow is Chairman of this foundation and he is the executive Chairman of independent estate agency Ludlow Thompson.

Charles (Charlie) Laing is the Operations Director of construction company CLPM Ltd. He has held this position since 2014 and before this, he gained a background working as a project manager for John Laing PLC. He is a director of the Early Opera Company

Sir Ewan Harper is the Chief Executive of United Church Schools Trust and of the United Learning Trust. He was knighted in 2003 for services to the Church of England.

Simon Martle is listed as the Finance Director of Rolls Royce. Prior to this he has held a number of other positions with the company, including as Chief Financial Officer of its defence department and as executive Vice President of finance. He was also formerly group financial controller and the head of corporate finance for the London Stock Exchange.

Dr Paul Van Den Bosch is a general practitioner who appears to be associated with medical charity Give a Kidney.