Manchester United and Manchester City have joined forces in an effort to support the victims of the recent suicide attack in the city.

The clubs have elected to donate £500,000 each to the We Love Manchester Emergency Fund.

Speaking on their respective donations, United’s executive vice-chairman said: ‘Our clubs are right at the heart of our local communities in Manchester and it is right that we present a unified response to this tragedy’

City’s Chairman, Khaldoon Al Mubarak, also said that they have been ‘humbled by the strength and solidarity shown by the people of Manchester’ and added that he hoped that both of their donations would ‘go some small way to alleviate the daunting challenges faced by those directly affected’.

Twitter user Carter Wilkerson has managed to set a new record of 3.6 million retweets in his quest to secure a year’s supply of free chicken nuggets from restaurant chain Wendy’s.

For perspective, the social media platform’s previous record of 3.4m retweets was held by comedian Ellen DeGeneres, who took the famous Oscar’s selfie in 2014.

As a bonus for Carter’s record breaking tweet, Wendy’s then decided to donate $100,000 to the Dave Thomas Foundation, an adoption charity created by the company’s original founder in 1992.

Voluntary organisations of all sizes make a difference

The majority of voluntary organisations in the UK are relatively small and operate on a local level. As such, these charities are also far more likely to depend on informal resources such as volunteering, despite the fact that they represent around 97% of the total number of charities throughout the UK. The remaining 3% are made up of far larger organisations with an annual income of over £1m, and it is these charities (household names such as Oxfam or the British Heart Foundation) that also account for 80% of the sector’s entire income.

This comparison can help to demonstrate just how reliant smaller organisations are on informal help and resources, and when respondents were presented with a list of charitable services, more than nine out of ten people reported having accessed at least one service, with children and young people cited as the most common beneficiary.

14 million people, or more than a quarter of the UK’s population are thought to volunteer at least once a month. People between the ages of 16 to 25 reported the highest level of volunteering in comparison with any other age group, while the steady increase in volunteering from young people during the course of the last five years now appears to have levelled out.

The support of the British public

Whilst funding from the government has increased for the second year in a row, this increase has predominantly been made up of fees and contracts that have been awarded to the largest of organisations, with government grants accounting for only 19% of charity income. While the £15.3bn in income that the voluntary sector receives from government does form a significant part of its incoming resources, this only accounts for around 2% of total government spending.

84% of the sector’s total expenditure (or £36.6bn) is spent on charitable activities, including grantmaking, the cost of generating funds and governance costs.

The sectors assets, including property, cash and investments is worth a total of £112.7bn. These assets are of course used to generate further funds in order to enable charities to ultimately achieve their aims. However, it is interesting to note that nearly 90% of the sectors total assets are held by just 3% of charities. According to the report, one of the sector’s longstanding challenges is the fact that that the vast majority of voluntary organisations have comparatively little reserves to call on.

Pride in the voluntary sector

From the consistently high levels of volunteering to the reach of the sectors impact on the local community, there is still much to be proud of.

With that said however, it is important to note that smaller charities and the communities in which they work are likely to continue to feel reductions in public expenditure, financial instability and recent inflation rises. Furthermore, stable levels of giving do not necessarily equate to a financially healthy sector.

A blend of grant and contract funding, properly funded and managed volunteering programmes, appropriate levels of regulation and the full recognition of the wider social value of the sector will all be necessary if it is to navigate these uncertain times 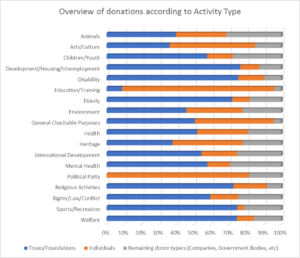 As the graph shows, donations from Individuals and Trusts/Foundations make up the majority of each activity type throughout the database, almost without exception. For reference, these two activity types combined currently account for 77% of all donations across the entire database.

It should be noted that the analysis is based on the data as it appears on Phi, and it is not necessarily representative of the wider giving sector as a whole.

This trust was formed in 1995 by the architect and building developer John Bothamley. After qualifying in 1990 he founded architectural projects company John Newlands Ltd.He remains as the owner of the company, which had its net assets valued at £5m in 2015.

Factary Phi holds 509 records of donations made to various organisations since 2005. According to Phi, the largest proportion of these donations have been made to causes associated with Children/Youth (181), International Development (76), Disability (59), Health (39), Education/Training (29), Development/Housing/Employment (27), Sport/Recreation (16), General Charitable Purposes (9), Environment (9), Arts/Culture (5), Animals (4) and Mental Health, Religious Activities and Rights/Law/Conflict (1).

John Bothamley is the owner of John Newlands Ltd. He is also a Trustee of First Give, Talk the Talk and he is head of The Hereford Civic Society.

His wife, Mary Bothamley is also a director of John Newlands Ltd.

Stephen Ratcliffe is listed as a Civic & Social Organization Professional.

We find a Taymour Ezzat who is a fund manager for Herald Investment Management. He was formerly the Finance Director of the North Cliff New Media Division, a financial analyst for Thomson Reuters and he was a chartered accountant for PwC.

Marion Baker is a former director of Ohal Marketing Consultancy. She has also acted as a volunteer fundraiser and as a member of the senior volunteer committee of the NSPCC. and she is a Trustee of the mentoring charity Reach Out.