Welcome to the January 2017 issue of the Factary Phi Newsletter.

Lady Veronica Lucan, whose husband vanished in suspicious circumstances in 1974, has reportedly left her entire estate to homelessness charity Shelter.

The late Dowager Countess of Lucan was found dead at her home in London in September of last year after an apparent overdose. This was reportedly due to the fact that, at the age of 80, she had come to the wrongful conclusion that she was suffering from Parkinson’s disease.

A spokesperson for the charity said that: ‘At a time when over 300,000 people in Britain are without a home, we are incredibly grateful for the support we receive.’

‘The proceeds from Lady Lucan’s estate will help Shelter to continue fighting bad housing and homelessness.’

George Lucan, who is her son and the incumbent 8th Lord of Lucan also added ‘I applaud the decision by mother to make a legacy to Shelter, a fantastic and worthwhile charity,’.

Reuters reports that an anonymous Bitcoin philanthropist has donated $5m (£3.53m) to the non-profit research organisation, the Open Medicine Foundation.

The donation was made to the foundation under the moniker ‘Pine’ which is itself connected to the Pineapple Fund, whose website, it states online, has already donated around $37 million anonymously to various charitable projects.

The same website has also stated that the fund intends to donate a total of $86m to various projects, simply due to the fact that: ‘once you have enough money, money doesn’t matter,”

Unfortunately, the Pineapple Fund website states that it is no longer accepting donations, but it would be worth keeping an eye on entities such as BitGive or Bitcoin Magazine for announcements of other emerging Bitcoin philanthropists.

Report: This month we have included our summary of several sections of the Coutts Million Pound Donor Report 2017.

As its name suggests, the report is created every year to track the nature and scale of donations of over £1m, and in order to provide an insight into some of the key trends in major philanthropy.

£1m donations over the past ten years

However, this is not to say that the total annual value of these donations hasn’t fluctuated over the decade, and indeed its lowest dip in 2010/11 represented a donation value of £1.23bn. It is thought that this is part of a larger period overall, measured between 2008/09 and 2012, which directly correlates with the UK financial crisis which would perhaps explain why major donors were less inclined or indeed able to give at this scale during that period.

It is also noted in the report that 75% of all of the largest single donations recorded during its history were made in the first five years (2006-2011).

The largest single donation to have been recorded was a £470m donation from Albert Gubay to his own Albert Gubay Charitable Foundation in 2010. He died in 2016, leaving behind a foundation worth £700 million. Other so-called ‘megagifts’ worth £100m or more were predominantly made by private individuals from charitable foundations.

This, according to the report, demonstrates the importance of giving individuals such as Gubay the ability to ‘bank’ significant gifts and to distribute them over time as their strategy as philanthropists becomes more defined.

While three quarters of the largest donations to have been made were recorded in the first five years, the second half of the decade saw 50% more donations overall, although they were comparatively lower in value.

While donations of £100m or more have understandably tended to attract the biggest headlines, £1m donations remain the most common. In fact, when the findings of all ten editions of the report are considered together, the most commonly appearing value of these donations remains at £1m, although these gifts represent only 15% of the total number of donations.

The fact that this exact figure appears so frequently seems to point to the fact that it has a kind of cultural resonance, making it an economically and psychologically significant figure for both donors and recipients. It is also interesting to note that the biggest gifts in other countries are also typically made in one million of the local currency.

At the other end of the spectrum however, while donations of £10m or more may account for only 13% of the number of donations, they do account for the majority (62.5%) of all of the donations in terms of their total value (£9.29bn).

From 2006 to 2016, Trusts & Foundations account for 64% of the total number (1,558) of all donations and over half of the total value (£7.67bn) of all £1m+ donations. The bulk of these have come from major foundations like the Wellcome Trust, the Gatsby Charitable Trust and Atlantic Philanthropies.

It is noted however, that the latter two foundations have elected to spend down their assets and close, with Atlantic Philanthropies completing its grant-making at the end of 2016 and planning to close completely by 2020.

Of the foundations based in the UK, approximately half of them are family foundations where more than one member of the family is involved in decisions about giving.

Trends in Sources of Giving

Donations from individuals have consistently remained behind those from Trusts & Foundations in both number and total value for all ten editions of the report. Interestingly, however, donations from companies have now overtaken those of individuals in terms of the amount given year-on-year.

Based on the data, this seems to have come about as a result of several large donations made by a small number of specific corporations.

Historically, the UK corporate sector has not had a strong tradition of making such large donations. However in the case of family businesses where the people are involved as both owners and shareholders, this is not the case, as they have a stronger sense of charitable responsibility. It is also thought by many companies that by fostering a reputation for their philanthropy, they may be able to create a competitive advantage and thus attract the best employees who may feel more obligated to work for so called ‘good’ organisations (in the broadest sense of the term).

For this month’s edition of our database update, we thought it might be interesting to survey the spread of donations made relatively recently from 2013 to 2016.

The graph we have included below shows the spread of donations made to all activity types throughout the database, with donations split up according to banding ranging from those with the smallest amount (£1-£2,499) to the largest (£1m+). 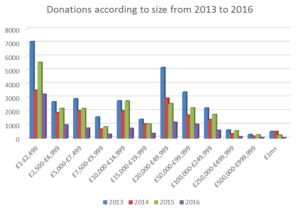 As is demonstrated by the graph, the most populous donation banding overall is also the smallest. While this is perhaps to be expected, it is interested to note that there is a particularly large number of donations in this range for 2013.

While the number of donations stays relatively even in other areas, the same is also true for the £20,000 – £49,999 bracket, where there appears to be a significantly larger amount of these donations also in 2013.

It must be noted that some of the annual reports for years 2016-2017 have not yet been uploaded to the Charity Commission website and as such donations from this period do not yet appear on Phi. It is likely that there will be an increase in 2016 donations as we upload further data. Also, for the purposes of this analysis, only donations with an exact donation amount have been included, those with only a gift band upper or lower amount have been excluded. Therefore it should be noted that the graph is based on the data as it appears in Phi, and it is not necessarily representative of the wider giving sector as a while.

This is the family foundation of John Stone, who is a financial services professional and the current Chairman of Blevins Franks.

He has had a career spanning 40 years in the financial services industry, during which time he served as a founder and a former Chairman of Lombard, a life assurance company specialising in estate and tax planning solutions. This company was sold shortly before this foundation was established in 2005.

His foundation broadly aims to relieve poverty and presently, its focus is on water and sanitation in the developing world, a cause which it reportedly devotes around 80% of its funding to. In the UK, his foundation focuses on causes associated with mental health and programmes for disadvantaged youths.

In previous years, it has focused on a range of projects in the UK including mental health and the provision of education for girls, water and sanitation internationally.

The largest proportion of these donations have been made to causes associated with International Development (18) followed by Mental Health (16), Education/Training (10), Children/Youth (5), Sport/Recreation (4), General Charitable Purposes & Rights/Law Conflict (3), followed by Environment, Development/Housing/Employment, Arts/Culture, Health and Welfare (2).

Mr John Stone is the current Chairman of Blevins Franks.

Mr Charles Edwards is a Director of the unquoted pool at Caledonia Investments. He has previously held positions in the audit, transaction services and restructuring departments of KPMG. He studied history at New College, Oxford.

Mr David Steinegger is currently a freelancer and the former Chief Executive Officer of Lombard International Assurance in Luxembourg. He is Chairman of Core Capital Management SA, Verona International OY and Wycliffe Bible Translators UK. He has previously acted as a fundraiser for SOS Villages d’Enfants, Luxembourg. He attended University College Dublin.