Welcome to the August 2015 issue of the Factary Phi Newsletter.

His bandmate Liam Payne also made a sizable donation to the charity after attended the event, where he paid £50,000 to get his face painted as part of the fundraising effort.

Louis was the host, and he added afterwards that he was ‘very excited and proud’ to support the work of the charity, which aims to support and entertain seriously ill youngsters.

Yorkshire Air Ambulance have been promised a £1m donation after a recent visit from George Osborne and England opening batsman Geoffrey Boycott.

The funding has been raised from fines levied on banks, and brings the total given to air ambulances across the country to over £10m in the past year. This is part of more than £500m raised in banking fines to have been pledged by the Chancellor in support military good causes and emergency service charities since 2012.

Speaking on their decision to award the money, George Osborne said: ‘it’s only right that funds from those who have demonstrated the worst values should go to those, like the dedicated and skilled air ambulance crews and their supporters who demonstrate the best of British values on a daily basis’.

This month, we have included our summary of the recent ‘Financial Sustainability Review’ of the voluntary sector, co-authored by Michael Birtwistle and Andrew O’Brien for the NCVO.

The review aims to consider how the sector has adapted to some of the wider economic changes that have taken place in the UK over the past few years, and also how these changes may have affected the charity sector in terms of its overall sustainability.

The research was conducted by surveying various organisations about their experiences and also through holding roundtables to identify some of the key trends since the recession. It is also worth remembering that this review has taken place over a period of economic recovery, and during some enormous reforms in terms of the size and shape of government spending, both in terms of the sector and in terms of UK public services.

Despite some evidence of real adaptation and resilience by the sector, the survey argues that these attempts have often been self-sacrificial, especially for small and medium sized organisations. The reason for this, it is argued, is because many of these organisations have eaten into their reserves, cut investments, and made other sacrifices all in an effort to maintain the level of support they provide on a day-to-day basis.

The long term sustainability of this approach is questionable, and this review seeks articulate the challenges the sector will be working through in the foreseeable future.

As it stands, the database currently holds 582,077 records of donations with a combined value in excess of £32.2 billion. For this month’s edition of our database update, we have decided to survey and compare donations made by various titled individuals throughout the database.

For the purposes of the survey, the titled donors we have featured include Barons and Baronesses, Lords and Ladies, Earls & Countesses, Dukes and Duchesses, Dames, Sirs, The Honourable & Right Hon and Viscounts.

Below, we have included a pie chart displaying the spread of titled donations to various activity types throughout the database. 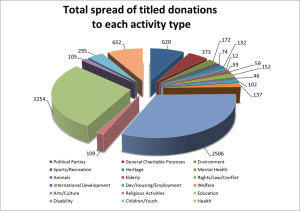 As is evidenced by the graph, the largest proportion of titled donations have been made into the Arts/Culture activity type overall, followed closely by Education, with donations to these two groups making up over half of all titled donations throughout the database.

We have also included a second graph, which contains a more detailed breakdown of each activity split according to donor title. 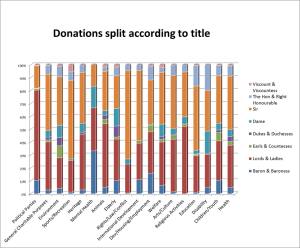 As the graph shows, the largest proportion of donations across almost all activity types have come from donors titled ‘Sir’ and from ‘Lords & Ladies’. The only exception to this being the Mental Health activity type, wherein donations from Barons & Baronesses feature more prominently.

It should be noted that our findings are based on the data as it appears in Phi, and it is therefore not necessarily representative of the wider giving sector as a whole.

Founded in 1906, this trust is formed from the will of Alfred Beit, a British-South African financier and a director of the British South Africa Company. Born in Hamburg in 1853, he began his career at Amsterdam diamond firm Jules Porgès and Cie, where he developed a talent for examining stones that would serve him well in later life.

He spent several years learning his trade with the firm, and it was not until 1875 that he was sent to Kimberly, South Africa to buy diamonds for the company, and it was also here that Alfred met and befriended future business partner Cecil Rhodes, who went on to co-launch De Beers Consolidated Mines in 1888.

Together the pair proceeded to buy out digging ventures in order to eliminate their competition, and as a result, Alfred came to be regarded as an influential financier in the country, where he held control over a number of diamond-mining claims in the Central, Dutoitspan, and the De Beers mines.

While he was mainly concerned with the Kimberley Central Company, Albert would later extend his interests to the newly discovered goldfields of the Witwatersrand, where he also had great success.

It was two years later in 1888 that he founded the British South Africa Company, and during this period, he also decided to move to London where he felt he would be better able to manage his financial empire.

His trust, which was first named the ‘Beit Railway Fund’, was originally formed in order to promote the development of communications and the infrastructure of Rhodesia. However, the terms of his will stipulated that its income could also be applied to “education, public or other charitable purposes in Northern and Southern Rhodesia” which has enabled the Beit Trust to exist in its present day form.

Alfred was never married, and had no children. He died near Tewin, Hertfordshire in 1906 at the age of 53.

According to Phi, the largest proportion of these donations have been made to causes associated with Education/Training (155), followed by Health (109), Welfare (10), International Development (50), Children/Youth (17), Religious Activities (12), Animals (10), Elderly and the Environment (9), Disability (8), Employment (7), General Charitable Purposes and Heritage (3), Arts/Culture (2) and Sport (1).

Jonty Driver is South African apartheid activist, former political prisoner, educationist, poet and writer. After leaving South Africa he attended Trinity College, Oxford and subsequently he spent some time as a teacher in the UK. He was a research Fellow at the University of York, a headmaster of Island School in Hong Kong, Headmaster of Berkhamsted School and the Master of Wellington College. He is an honorary senior lecturer at the School of Literature and Creative Writing, University of East Anglia, and he was also a Bogliasco Fellow, a Fellow at Macdowell Colony and a Fellow at the Hawthornden Writers’ Retreat. He is a Trustee of the Frewen Educational Trust.

Alan Munro is a former diplomat, author and UK Ambassador to Saudi Arabia. During his career he worked for the Ministry of Defense, he was Under-Secretary of State for the Middle East and Africa and he was the British ambassador in Saudi Arabia from 1989 to 1993. He is vice-Chairman of the Arab British Chamber of Commerce, a former governor of Imperial College in London, a former Chairman of the Saudi British Society and he was also vice-Chairman of the British Red Cross Society. He read history at the University of Cambridge and he is a Trustee of the Munro Charitable Trust.

Roy Lander is a retired former Chairman and Chief Executive Officer of Anglo American corporation Zimbabwe Ltd. He is also a former Chairman of a number of mining companies in Zimbabwe involved in coal, ferro chrome, nickel and gold.

Chris Lavy is a commissioner for The Lancet Commission on Global Surgery, the visiting professor 2014 at The Hospital for Sick Children, Toronto, and he is a Co-Director of the COSECSA Oxford Orthopaedic Link. He originally qualified at St Bartholomew’s Medical College in 1982 after gaining a BSC in Anthropology at University College London. He also trained in orthopaedic surgery on the Royal National Orthopaedic Hospital rotation and in 1992, he became a Consultant in orthopaedic and hand surgery at The Middlesex Hospital and University College Hospital in London.

Kieran Prendergast is a retired British diplomat and a former Under-Secretary-General for Political Affairs at the United Nations. He is a Trustee of the Anglo-Turkish Society.