Welcome to the September 2015 issue of the Factary Phi Newsletter.

The investment banking firm has donated £2m to the UN High Commissioner for Refugees in the wake of the much publicised refugee crisis in Syria.

The company’s gift is the largest private-sector donation the UNHCR has received since the crisis began, and it is to be used to provide the affected refugees with emergency food, accommodation and medical assistance.

The Lord Mayor of the City of London urged other firms to follow the example of Goldman Sachs. Alan Yarrow said ‘The City has a long and proud tradition of charitable giving and fundraising.’

Alan Yarrow said ‘The City has a long and proud tradition of charitable giving and fundraising.’

‘I would urge all Square Mile firms and workers to be showing their generosity at this time of need for the people of Syria.’

An anonymous benefactor has gifted £100,000 to the Cancer Centre Campaign.

The campaign, which is based in Colchester, aims to raise a total of £4.5m in order to fund the construction of a new cancer centre at the Colchester General Hospital.

At present, the hospital already boasts one of the best equipped radiotherapy centres in Europe. However, its chemotherapy and haematology treatments for blood cancers are currently administered in a separate suite, located a quarter of a mile away on the hospital site.

With adequate funding, a new facility will be built on top of the existing radiotherapy centre which will be equipped to provide all appropriate treatments in one area.

The charity has pledged to donate the huge sum of £5m to the Imperial War Museum’s Holocaust exhibition.

In particular the money will be used to renew its 15-year-old Shoah exhibit, which features a number of personal stories and survivors’ testimonies.

Executive Chair of the Pears Foundation, Trevor Pears said: ‘Our family is delighted to be supporting this important project’.

‘We strongly believe that the refurbishment of the Holocaust exhibition at the Imperial War Museum in London has the potential to be of ground-breaking importance in the way the Holocaust is taught, contextualised and understood, both nationally and internationally’.

Diane Lees, director of the museum, said: ‘We are hugely supportive of the initiatives laid out by the UK Holocaust Memorial Foundation and wish to play our part to ensure that Britain has a permanent fitting memorial and meaningful educational resources for generations to come.’

This month, we have included our summary of a recent report on skills in the voluntary sector. The report is entitled the ‘UK Small Charity Sector Skills Survey’ and it was written by Madeleine May and Pauline Broomhead.

This is the report’s fourth edition, and it is intended to identify and analyse the nature and scope of skills shortages in the workforces of small charities in the UK.

As stated above, the aim of this survey was to explore the nature and scope of skills shortages in the paid workface of the small charity sector. Its results are intended to provide a reliable measure in order to:

Scope of the Survey

The survey’s findings are based on the responses from individuals employed by registered charities with an annual turnover of less than £1.5m, and the majority of respondents were in positions of leadership or governance within their respective organisations.

However, due to the limited number of people working at smaller organisations, it should be noted that a greater number of respondents had multiple roles within their organisations. For this reason, the survey focused on specific skills used by individuals within the sector versus specific job roles.

Respondents were asked to answer questions relating to areas within their charity which they were directly responsible for, or at least positions which they had a strong working knowledge of.

From the results of the survey, the report concludes that skill gaps still represent a major barrier for small charities across the UK, with many basic problems for these organisations remaining the same.

This month, a hefty batch of 14,860 new records worth in excess of £348m were uploaded to the Phi database; this brings the total to 596,939 records of donations and philanthropy.

The majority of these have been made to educational organisations such as the University of Bristol and various Cambridge colleges; however the upload also includes a number of other donations made to various arts organisations and charities, such as the Royal National Theatre, Christian Aid, Great Ormond Street Hospital and United Response, amongst others.

In light of this rather sizable upload, we have decided to survey the number of new records for each charitable activity type. 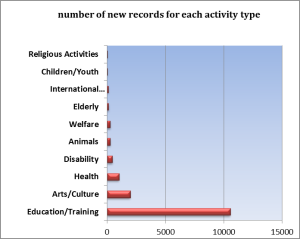 As the above graph shows, the largest proportion of records in the latest upload are made up of donations made to the Education/Training activity type (70%). Interestingly however, while there are a relatively smaller number of donations in other areas, the highest donation (£) value overall was in fact in the area of Disability (some £284m), followed by donations to Health related charities (£49m).

Below, we have also included a separate graph showing the spread of these donations into each charitable activity area by type of donor. 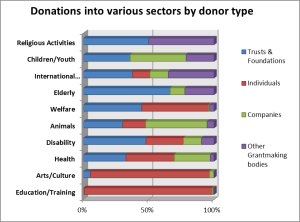 This trust was formed in 1994 from the Will of a Mrs Fanny Violet Mary Eveson, who left an estate valued at just over £49m at the time of her death. There is little biographical information available regarding her life or career, however according to its website, her trust was founded in order to support charitable purposes relating to the support or relief of the physically handicapped, the blind and the deaf, the mentally handicapped, the elderly and the homeless.

Aside from the creation of this trust according to the terms of her will, Violet Eveson also arranged for several other separate charitable provisions to be made after her death. These include gifts of £250,000 made to various children’s charities, £50,000 to Guide Dogs for the Blind Association, £25,000 to the Salvation Army, £10,000 to St Michael’s Hospice, and gifts of £5,000 each made to the RNLI and to the Bishops Frome Church.

According to its website, the trust is concerned with the support of any causes concerned with the activity types listed above, however it should be noted that it will only consider applications from causes that are for the benefit of people living in Herefordshire, Worcestershire and the West Midlands (meaning Birmingham, Coventry, Wolverhampton and the metropolitan boroughs of Dudley, Sandwell, Solihull and Walsall).

According to our Phi database, the largest proportion of these donations have been made to causes associated with Health (353), followed by Welfare (216), Children/Youth (181), Disability (95), Elderly (94), Development/Housing/Unemployment (68), Education/Training (43), Arts/Culture (31), Sports/Recreation (20), Rights/Law/Conflict (13), Mental Health (12), Religious Activities (10), General Charitable Purposes (8), Environment (7), Animals (2) and International Development (1).

Martin Davies appears to be a solicitor with Pearson & Hereford solicitors.

Richard Mainwaring is Chairman of the board of trustees, and he is also the owner of Mainwaring Dean Associates, a chartered accountancy firm. He was formerly a Partner with Little & Co Chartered Accountants and he was educated at The College of William and Mary.

Bill Wiggin is a Conservative Party politician and an MP for North Herefordshire. Before this, he was Shadow Minister for Agriculture & Fisheries, and he attended Eton College.

Judi Millward is honorary President of Birmingham St Mary’s Hospice. She was formerly its Chairman and she was also formerly Chairman TLC Lottery Ltd in 2010. She is a Trustee of The John Avins Trust.

Richard Frith is the current Bishop of Hereford and he is the former Bishop of Hull. Prior to this, he was elected as the archdeacon of Taunton in 1992 and he is currently a Trustee of ‘The Mission To Seafarers’ charity.

We use cookies on our site – currently we operate an ‘implied consent’ policy which means that we assume you are happy with this. More info