Welcome to the June 2016 issue of the Factary Phi Newsletter.

Peter Congdon, a widower who won an incredible £13.5m on the Lottery last year, has chosen to donate £1m to the Merlin MS Centre as a tribute to his late wife.

His generous donation is to be used to help fund the construction of a new £1.5m hydrotherapy pool at the centre.

His wife Rosemary was a sufferer of the disease, who died at the age of 56 eight years ago.

Speaking on his donation, he said: ‘I cared for my wife for over 30 years and to watch someone you love struggle with a condition like MS is really tough’.

‘Cornwall had nothing like the Merlin MS Centre at that time and I know Rosemary would have really benefited from what they offer there already’.

Poole entrepreneur Robert White has left a £10m legacy to the Dorset Cancer Centre, Poole, after receiving treatment for the disease there last year.

Robert was able to raise part of the money for his legacy through unusual means. Aside from his successful photography business, he was also the owner of a highly valuable collection of Brough Superior vintage motorcycles, which he chose to sell to his friend, American talk show host Jay Leno, in order to raise the money.

Leno, who owns a substantial collection of classic vehicles himself, agreed to purchase Robert’s collection for £3.5m. He had the following to say about his friend’s decision:

‘He realistically faced up to his position and decided he wanted to give something back to the people in Poole Hospital who had helped him with his illness.’

Robert and I spent time together in England before he died,’ he said, and adding that ‘He didn’t feel sorry for himself’.

He died in November of last year, and the Robert White Cancer Centre is to be built at Dorset County Hospital in his honour.

After collecting its data from charities across the UK for 33 months, researchers for this report have determined that small charities are generally failing to collaborate with each other in a meaningful way, as only 19% of those surveyed were found to be working together to what is considered to be an effective level.

It is this somewhat troubling statistics that has led to their decision to undertake more detailed research into the area of charity collaboration.

An ever increasing number of people throughout society are beginning to turn to small charities in order to help them solve some of their most difficult and trying issues. Whatever the issue might be, many of the solutions to these problems are often held in the collective knowledge and expertise of smaller charities, the report states.

This greater sense of collaborations could not only be used to help resolve social issues faster, but could also facilitate greater efficiency, growth and sustainability in terms of the services that are so important to many local communities.

While fostering this approach would by no means be easy, this paper considers a number of different levels or approaches to collaboration. 708 different charities responded to the research, with 66% reporting undertaking at least some form of collaboration, with 34% undertaking none whatsoever.

The most common form of collaboration by far, 65% of respondents reported undertaking some of networking. Three quarters of all of these respondents stated that it was of benefit, and that it helped them form connections that were useful to their charity.

39% of respondents have had experience of this approach, the majority of which forming alliances in order to support the delivery of direct services (72%). According to the research, charities should be investing more time in developing this approach, as it is extremely efficient in terms of benefit gained versus the amount of time required to deliver them.

Apparently, only 54% of small charities using this approach have a formal agreement in place to support the alliance. This is worrying, as ensuring a concrete agreement is in place before any intellectual property has been in exchanged can be crucial in ensuring the smooth running of any partnership between two orgs.

Just over a quarter of respondents were currently part of a formal partnership, with 20% indicating that their charity had a history of using this approach.

Formal partnerships are most commonly (63% of respondents) formed in order to better meet the needs of a shared beneficiary group’. With that said however, financial benefits such as ‘better ability to secure funding/contracts’ and ‘funding bodies potentially favouring charities working in a partnership or consortium’ were also cited as key drivers to forming formal partnerships.

Only 6% of respondents stated that they were currently undertaking a joint venture, which was thought to be surprising, as they are an established form of collaboration in the commercial sector.

One reason for this, is that small charities may be wary of entering into a (project specific) joint venture because of the legal implications that are involved. It’s important to remember that joint venture partners not only share in the benefits of the venture itself, but also any potential losses brought about as a result.

With that said however, over half of the respondents currently involved in a joint venture reported that the most common benefit was ‘greater financial reward’, and the most intangible benefit was ‘increased awareness of the charity’. Based on this, it seems appropriate to consider this form of collaboration seriously.

Charities currently part of a merger

Representing 3% of respondents, mergers are highlighted as successful if they manage to improve the outcomes of beneficiaries and if they are conducted from a position of strength. 64% reported ‘improved services to their user group’ as a key driver.

The low number of small charities merging may be attributed to the fact that mergers are perceived as complex, and driven by financial imperatives. With that said however, they are still worthy of investigation if their use may improve the outcomes of beneficiaries, the report states.

Only 2% of respondents reported that they were currently considering entering into a merger, with almost all of them citing ‘securing additional funding/increased sustainability’ as a key motivation.

For this month’s database update, we have decided to include a comparison of all donations to have been made by Individuals versus those by Trusts & Foundations throughout the database, relative to each of Phi’s various sub categories.

The bars in purple represent the proportion of donations made by Trusts & Foundations, while the blue represents those made by Individuals. 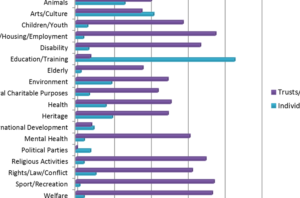 So as the graph above demonstrates (with just three exceptions), almost every activity type in the database receives the highest proportion of their publicly acknowledged donations from the Trusts & Foundations donor type.

The notable exceptions to this are the Arts/Culture and Education/Training activity types, both of which are arguably well known for publicly acknowledging the support they receive from individuals, particularly in the case of Universities and other similar educational establishments who might regularly receive support from former students.

It should be noted that the statistics are based on the data as it appears in Phi, and are therefore not necessarily representative of the wider giving sector as a whole.

The trust was established in 1997 following a merger between companies Trust House Forte plc and Granada plc. The shares in Granada were then sold, resulting in the formation of Trusthouse Charitable Foundation in 1997, backed by a £50m investment.

From the information listed on its official website, the foundation’s current policy is to provide support for charities in the form of grants for running costs or to pay for one-off capital costs to charities and not-for-profit organisations. More specifically, since 2008 the foundation has been focused on supporting charities operating in two key areas.

The first of which is categorised as organisations seeking to address issues in rural areas, the second is categorised as urban deprivation, which refers to causes operating in deprived urban areas. Within this context, the foundation is particularly interested in charities involved with community support, disability, healthcare, the arts, education and heritage.

Crispian Collins is the Chairman of Schroder’s Global Real Estate Securities Ltd and he is a former Chief Executive Officer and Vice Chairman of UBS Global Asset Management (UK) Ltd. He is also a former Chief Executive Officer and Chairman of Phillips & Drew, London where he was a founding director of the Phillips & Drew (Triton) property team. He is a Trustee of the Coloma Trust and the Thai Children’s Trust.

Sir Hugh Rossi is a solicitor and a former Conservative Party politician who has held positions as a councillor and as a Member of Parliament for Hornsey and Wood Green.

The Hon Olga Polizzi is the deputy Chairman and the director of design at Rocco Forte Hotels.

The Lady Janet Balfour Of Burleigh

Sir John Nutting is a barrister and a current Master of the Bench at the Honourable Society of the Middle Temple. He is also currently a Trustee of the Burghley House Preservation Trust.

Rev Rose Hudson-Wilkin is a Church of England priest and the current Priest in Charge of St Mary-at-Hill, City of London. She is also the Chaplain to the Speaker of the House of Commons, priest vicar at Westminster Abbey and the chaplain to the Queen. Before this she was the vicar of the Holy Trinity Church, Dalston and of All Saints Church, Haggerston.

George Hepburn is an entrepreneur operating in the voluntary sector. He is the proprietor of Bewick House Enterprises, he acts as a voluntary fundraiser for Hexham Book Festival and he acts as the interim Chief Executive Officer of Hope North East. He attended the University of Kent, the University of Sussex and he is a Trustee of Prudhoe Community Partnership.

Lady Anthony Hamilton is the wife of Lord Claud Hamilton. She is a Trustee of The Wheelyboat Trust.