Welcome to the July 2016 issue of the Factary Phi Newsletter.

The philanthropist, who made his name as a property developer, has two grandchildren who have been associated with the institution. Speaking on his donation, he also added that he was surprised to discover that LSB had such a low endowment:

‘The Americans have a much more active alumni stream in money-raising and promoting the university’. He said that he hoped his donation would ‘create a benchmark for other people to match. It’s not over the top but it’s meaningful’

Johanna Mather, who is marketing coordinator at Slimming World said that the organisation was delighted to have broken the £2m barrier in such a short period.

‘Not only is the clothes throw a perfect opportunity for Slimming World members to celebrate their slimming success and the fact they’ll never need their ‘before’ clothes again, it is also vital to spread the message that keeping a healthy weight could reduce the risk of developing 10 different types of cancer’.

This month we have included our summary of CAF’s recent report on the value of charity to British households. It is entitled ‘Charity Street II’, the paper was produced by the Foundation for Social Improvement (FSI) as a part of Small Charity Week.

Following on from the first edition of this report completed in 2014, CAF have decided to revisit and enhance the quantitative survey that was used as part of the research. This has been done in the hope that this topic can be understand in more detail and to see what, if anything, has changed in since the original report was published.

Based on the findings of the report, researchers recommended that:

For this month’s database update, we have decided to include an overview of the Armed Forces activity type as it appears throughout the database. Phi currently holds 1,419 records of donations to armed forces charities worth a minimum of £21,956,201. 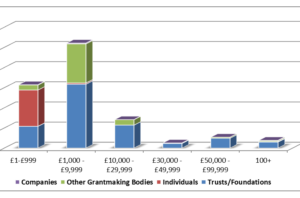 Above we have included a bar chart showing the number of donations in this activity type split according to banding and donor type, and as is evidenced by the graph, the largest proportion of these donations have been in the £1,000-£9,999 banding, with 522 records overall.

Below, we have also included a separate chart showing the makeup of this activity type according to donor. 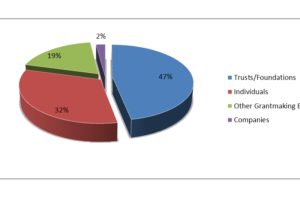 As the chart above shows, almost 50% of all donations in this area have come from the Trusts & Foundations donations donor type.

The trust was established in 1952 by Sir John Laing, an entrepreneur and businessman in the construction industry.

Born in 1879, he inherited his father John’s building business, now known as John Laing plc – in the early 1900s. As its head, he was credited for its expansion from a local building company into a national firm, culminated in the rebuilding of Coventry Cathedral in the year 1962. He married Beatrice Harland in September 1910, after whom this trust is named.

In terms of its remit the trust is focused on the advancement of the evangelical Christian faith, and organisations which provide support for most vulnerable and disadvantaged in society, including the homeless, the elderly, former armed forces members and ex-offenders.

The highest proportion of these have been made to causes associated with Religious Activities (91), followed by Disability (56), Children/Youth (40), Health (38), Development/Housing/Employment (35), Education/Training (25), Welfare (23), International Development (18), Elderly (8), General Charitable Purposes (7), Heritage and Mental Health (6), Rights/Law/Conflict and Sport/Recreation (4).

Christopher Laing OBE has held a number of positions with John Laing plc including as the company’s Director of Environmental Affairs. He retired from this position with the company in 2002 to take up a career in the voluntary sector, during which time he served as a Chairman of the National Playing Fields Association and as a Trustee of Global Action Plan and the Hertfordshire Community Foundation. He is currently Trustee of both the John Laing Charitable Trust and his own Christopher Laing Foundation.

Sir Martin Laing is a grandson of Sir John Laing and the son of Sir Kirby Laing. He is a former Chairman of John Laing plc and he is featured on the Sunday Times Rich List 2016 with an estimated wealth of £160m based on his position and career with the company y. He is a Trustee of the John Laing Charitable Trust and the Martin Laing Foundation.

Mr Charles Laing is the Operations Director of construction consultancy CLPM Ltd. Before this he has held a variety of positions with John Laing plc including as project director, coordinator and manager. He is a Trustee of The Early Opera Company Ltd and the Maurice and Hilda Laing Charitable Trust.