Welcome to the September 2016 issue of the Factary Phi Newsletter.

The retired dentist and property developer has donated in memory of his wife Jean, who was diagnosed with Alzheimer’s in 2008.

Speaking on his donation, Malcom said “I believe that I have a responsibility to help the less equipped (and) money was never a big thing for Jean and I.”

He also added that she “had always volunteered and wasn’t happy unless she was helping someone, so she inspired me to donate the money”.

His donation is reportedly the largest the charity has ever received from a single donor in its 37-year history.

The Defence Logistics Trust has donated £300,000 to the Gurkha Welfare Trust.

The money is to be used to support ex-serviceman along with a number of vital infrastructure projects, including schools in Nepal delivered under the Gurkha Welfare Scheme.

This month we thought it might be interesting to include a link to a recent report conducted by the Association of Charitable Foundations into the Top 300 Grant-Making Foundations.

The report is entitled ‘Giving Trends – The Top 300 Foundation Grant-Makers’.

This is the third year this report has been published but this year the report includes an analysis of where the money goes – i.e. to which causes/sectors Foundations are awarding grants. This analysis on recipient sectors was done using data from Factary Phi and we’re really proud to have been able to contribute to the Top 300 Foundations report.

Headlines from the report include:

For this month’s database update, we thought it might be interesting to survey donations from titled individuals throughout the database. For the purposes of the survey, titled donors in this case refers to donations from donors with the title Sir, The Honourable, Dames and finally Lords & Ladies.

At the present Factary Phi holds a total of 9,649 records of donations from the above donors and below, we have included a pie chart showing the composition of data pertaining to titled individuals. 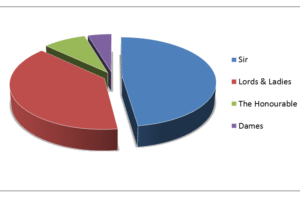 We have also included a separate chart showing the average size of donations in Phi from each group. However for the sake of clarity, we have excluded any ‘Gift Band Upper’ donations, along with many of the extremely large donations taken from the Sunday Times Giving List which are typically made to ‘various’ recipients rather than a specific cause. 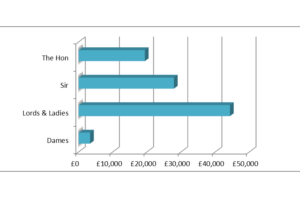 As evidenced by the graph, the largest average donations in Phi have come from Lords & Ladies and by some distance, followed by Sirs, The Honourable and finally Dames.

This trust was established in 1963 by insurer and philanthropist Peter Scott, who was Chairman of the family-owned insurer, the Provincial Insurance Company.

Educated at Oriel College, Oxford, Peter Scott initially served as a Captain in the British army during the Second World War. After he was discharged in 1946, he returned to England where he joined the family business as a director. He was to hold this position for the next 31 years before succeeding his father as Chairman of the company in 1957. He held this position for the next 20 years, before stepping down from the day to day running of the business in 1977. He then served as company President until its eventual sale in 1994.

His trust was endowed with significant holdings of Provincial Insurance Company shares between 1963 and 1971 and it is named after Peter’s father, Francis C Scott, in recognition of his own philanthropic work.

For the financial year ending the 31st Dec 2014 the foundation reported an income of £967,178 and an expenditure of £1,443,587. Factary Phi holds 138 records of donations made since 2006 worth a minimum of £15.8m. The highest proportion of these have been made to causes associated with Children/Youth (38), Development/Housing/Employment (19), Education/Training (17), Welfare (15), General Charitable Purposes (14), Religious Activities (8), Sport/Recreation (6), Rights, Health and Arts/Culture (4), Environment and Mental Health (3), Heritage, Disability and the Elderly (1).

Mrs Susan Bagot MBE is the Chair of Trustees and she is also a Trustee of the Levens Charity, Savin Brow Quarry and the Levens Institute.

Miss Madeleine Scott is an estates manager and a director of the Matson Ground Estate Co. She is also a Trustee of the Lakeland Arts Support Trust, the Scott Bolton Trust, The Brewery Arts Centre Endowment Trust and the Sir James and Lady Scott Trust.

Mr Alexander Scott is also a Trustee of the Scott Bolton Trust.

Ms Melanie Wotherspoon is a member of the Investment Management team at Rathbones.

Mr Malcolm Tillyer is the former Southwark Borough Commander of the Metropolitan Police. He retired from this position in 2009 and he is also a Trustee of the Brathay Trust and the Lakeland Housing Trust.

John Bannister is the reverend of S John the Evangelist, Lund.