His remarkable donation is to be spent on the refurbishment of the Piccadilly building’s senate rooms, and to also launch two international awards for excellence in the field of architecture.

Speaking on his donation, Lloyd commented that he wished for his donation to cement London’s status as ‘a world centre for architecture’, and adding that: ‘I have always had an interest in architecture and design and am delighted to support these exciting plans.’

‘The Academy has been led by artists and architects for nearly 250 years, and this will revitalise its presence and profile. The international awards will recognise the best in architecture, and again highlight the RA’s role in London’s cultural life.’

The charities to benefit are Refuge, Mary’s Meals, Buttle UK and Whizz-Kidz, all of which were voted for by more than 100,000 employees at Dow Jones, HarperCollins UK and News UK.

Chief Executive Officer of News UK, Rebecca Brookes, said ‘Each year News Corp has donated money to charities nominated by our staff, offering them the opportunity to support causes they feel strongly about. Our staff will follow the progress of these worthy projects and I hope this funding will make a real impact on the charities.’

This month we have included our summary of a report by Populus into Trust and Confidence in the Charity Commission.

Relative to the first study conducted two years ago, the public have notably become more aware and more engaged with charities and charity regulation. There has also been a significant rise in the number of respondents who said they have either received support or formed a close connection with a charity. Three in five people have now heard of the Charity Commission and an increasing number of people are making use of its online register and website.

According to the report, public trust and confidence in charities is broadly comparable with the schooling, childcare and food and drink sectors. However, stakeholders perceived a decline in public trust and confidence overall, and they considered this to be one of the major challenges facing the sector. They were also concerned about the impact this may have on donations and there is also some continuing uncertainty relating to Brexit, the policies of the government and the challenges of adapting to new technology.

58% of respondents agreed that the charities in England Wales are regulated effectively, with only one in five disagreeing. However when compared with 2015 this represented a 7% drop in confidence, and although 41% of the public felt that the currently level of regulation was broadly satisfactory, a significant minority still felt that there is too little. Despite this however, stakeholders still felt that the current level of regulation compares favourably on an international scale, and that it could easily be held up for others as an example. All three audiences also made it clear that they highly valued the role of the Charity Commission.

Members of the public who had heard of the Charity Commission generally rated it positively in all performance areas, including in terms of acting with authority and expertise, being transparent, and also in terms of its ability to protect charities from misuse. Charity respondents, (who are thought to be the most knowledgeable) gave it an even higher rating.

Stakeholders were similarly positive, and elaborated to say that they thought the Commission’s staff were passionate, committed, and performed well with limited resources. However, they did also express concerns that the organisation has at times appeared to be politically driven and subjective in its treatment of particularly high profile incidents.

Charity respondents found the Charity Commission easy to deal with, the same as in 2015. Since then they have been making greater use of its digital services and online guidance. Stakeholders were full of praise for staff members, however there were worries from some regarding the volume of the Commission’s engagement and the decline of some its services. This was attributed to a lack of resources.

All three audiences agreed that there are two sides to the Charity Commission in terms of its role as a regulator.

According to stakeholders, there seems to have been a shift in how the Commission describes its role in the last year or so. This is to say that it has gone from an approach focused upon policing to approach more focused on offering support – however they also felt that there has been a degree of confusion, and that it needs to be clearer about the direction in which it wants to move.

All stakeholders were aware of the proposal to seek funding from charities alongside the state. A minority are in favour, however the majority were fairly evenly split between ambivalence and opposition. They also cited a number of concerns, ranging from issues regarding independence, the ability of smaller charities to pay additional fees, and the chance that the government would cut funds to the Commission once the new funding model had been implemented.

During the course of this month, just under 5,000 new records of donations have been uploaded onto the Phi database, with the latest upload largely comprised of donations made by Trusts & Foundations. Some examples of these include the All Churches Trust, The Hedley Foundation and the Community Foundation Serving Tyne and Wear and Northumberland.

This takes us to a total of 730,842 records of donations overall, and for this month’s edition of our database update, we thought it might be interesting to survey all donations to have been made by various titled individuals throughout the database.

For the purposes of the survey, the titled donors we have featured in this survey include Barons and Baronesses, Lords and Ladies, Earls & Countesses, Dukes and Duchesses, Dames, Sirs, The Honourable & Right Hon and Viscounts.

Below, we have included a graph showing a breakdown of each title according to activity type. 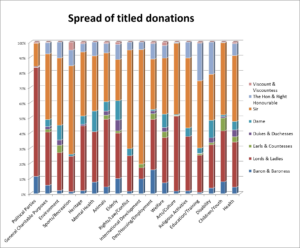 As the above graph demonstrates, the largest proportion of donations across virtually all activity types have come from Lords and Ladies and donors with the title ‘Sir’. The only activity type that comes close to breaking this trend is in the case of Education/Training, where donations from ‘The Hon & The Right Honourable’ feature more prominently. Dames, Dukes, Viscounts and Earls appear the least overall although Dames are notably active in causes supporting the elderly, people with disabilities and mental health causes.

It should be noted that our findings are based on the data as it appears in Phi, and it is therefore not necessarily representative of the wider giving sector as a whole.

This trust was founded in 1971 by the descendants of William Hedley, who was a railway engineer and coal mine owner.

As an engineer, his work revolved around the development of more efficient coal transportation in Wylam, where he was based. Most notably, he was a developer of new, more efficient cast-iron plate rails that were installed Wylam Collliery in 1808, and he was also a creator of a new system of coupling wheels and the revolutionary ‘Puffing Billy’ locomotive that facilitated their use.

The train remained in active service until 1863, and his descendants remained as coal mine owners until these became nationalised in 1947. This trust is formed from the compensation they received upon nationalisation.

The foundation’s main aim is to better the lives of young people, and to achieve this, it typically makes capital or one-off grants.

Factary Phi holds 62 records of donations made to various organisations since 2005. According to Phi, the largest proportion of these donations have been made to causes associated with Arts/Culture (21), Children/Youth (9), Health & Education (6), General Charitable Purposes (4), Sport/Recreation (3), Environment, Elderly and Community (2), and Religious Activities, Heritage, Welfare, Disability, Development/Housing/Employment, Animals & Armed Forces (1).

Colonel George Broke is a retired soldier who has served in the Royal Artillery. He was also formerly an Equerry to the Queen from 1974 to 1977.

Major John Rodwell is Chairman of this foundation. He holds directorships in several property companies and he is a former director of MERRILL Lynch Investment Managers Group Services Ltd. He is a Trustee of the Peter Stormonth Darling Charitable Trust, The Lockie Trust, The Meadows Trust, The Miles Marriott Trust and the Ravensword Trust.

Mr Patrick Holcroft is a former merchant banker and insurance broker. He is a former member of UK Merchant Banking Group Robert Fleming, a Director of Fleming Investment Management, and he was also Chief Executive of Robert Fleming Insurance Brokers. He was also formerly a soldier in the Grenadier Guards, and he is the he Lord Lieutenant of Worcestershire. He is a Trustee of the Ravensword Trust.

Lt Col Peter Chamberlin is a director of Fairhood Properties Ltd and Middlerigg Services Ltd. He originally served with the Royal Green Jackets.