Redrow Chairman Steve Morgan has donated $1m towards the hurricane relief effort in the Caribbean.

Mr Morgan, who has owned a second home on the island of Antigua for several years, also called on the international community for further aid as a matter of urgency.

‘My heart goes out to everyone affected by Hurricane Irma’ said Mr Morgan.

‘We have all seen the truly horrendous pictures and footage of the damage caused by the hurricane and cannot begin to imagine what it is like for those involved.’

Next founder to give away £5m

Retail businessman George Davis is set to donate £5m to the University of Leicester and Leicester Hospitals.

His donation will be put towards a specialist clinic at the city’s Glenfield Hospital which has been specially designed for the prevention of limb amputation and to fight vascular disease.

He was motivated to support the clinic because of his parents, both of whom suffered from related health issues during their lives. His past philanthropy also shows a long-standing interest in these causes, as his charitable trust funds a number of specific schemes in the health and education sectors.

‘More people die from vascular disease than they do from cancer. Every year 7,000 people in the UK have to have a limb amputated – we are hoping this new clinic will cut this number’ Mr Davis said.

This month we have included our summary of several chapters of the Association of Charitable Foundation Giving Trends 2017: Top 300 Foundation Grant-Makers. The report was written by Cathy Pharoah, Catherine Walker and Keiran Goddard.

In the UK, both the terms ‘foundation’ and ‘trust’ are interchangeably used to describe charities with a private, independent or sustainable income that allows them to carry out their objectives.

The Association of Charitable Foundations (ACF) for example has over 300 member organisations, and these range from large independent foundations, local and community trusts, family trusts, corporate foundations to fundraising appeals. The majority of its members are grantmaking trusts, however an increasing number of these are becoming involved in other foundation activities such as social investment, running their own programmes, research, and policy and influencing work. Aside from charities, foundations may also fund a number of other different organisations such as universities, research, education, individuals and public and private sectors.

At their best, independent charitable foundations are able to provide an efficient, transparent and irrevocable way to transform private wealth into public benefit. Though their annual spending power is considered to be relatively small when compared against UK government expenditure (equivalent to 0.4-0.5%), they often punch far above their weight. Due to their independence, it is possible for them to support causes that might otherwise struggle to gain attention, and they can also offer more long term support, and they may be more flexible in their approach in trying to find long-term solutions.

The report’s Top 300 Foundation Grant Makers are defined as those which:

The top 300 foundations contribute roughly two fifths of the total grant spending of all charitable foundations, estimated to be worth £6.2bn. Other foundations that would be excluded from this are those that are publicly or member-funded, or those that might support a single institution. For example the Big Lottery Fund is not included in the Top 300 as its funding is awarded as part of a government mandate.

According to the data grantmaking in 2015/16 grew by 12.2%. This demonstrates a further increase from last year and means that there has been growth in grant-making for the last three years running. This represents an additional £560m over the period, of which two-fifths relates to grants made by the Wellcome Trust. Much like last year, this years’ report also identifies new entrants to the Top 300 table, all in the medium to small range.

In recent years, income levels have fluctuated in line with the volatility in market trends and in major giving. With that said however, the average growth in 2015/16 was 4.4% due to a healthy gain in income from investments. Voluntary income saw modest growth after a significant fall last year, perhaps unsurprisingly as major giving is generally characterised by inconsistent spikes and drops. Despite some major donations into family foundations the overall growth in voluntary income from family foundations is negative, compared with a small increase in the Top 300 overall.

Alongside the increase in spending for this year there was also an asset growth of 9.6%, representing a growth rate three times higher than the previous year. In the longer term, asset trends now show a continuous growth rate averaging at 10% per annum. With that said however, year-on-year growth rates have been up and down, and the wider market effects of Brexit continue to be volatile.

Amid signs that economic growth is slowing again, it is hard to make any prediction about what the medium-term future holds for foundation giving, though next year may benefit from this years’ strong asset growth.

For this month’s database update, we have decided to survey the spread of donations made by Individuals, Trusts & Foundations and Phi’s other donor types. 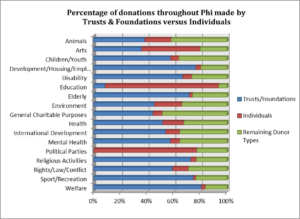 As the above the graph demonstrates, Trusts & Foundations continue to occupy to the topspot in terms of donation numbers for almost every Activity Types throughout the database. There are however a few notable exceptions, with donations to the Arts, Education and of course Political Parties receiving a higher percentage of their donations from Individuals.

Based on the graph, it would appear that majority of donations throughout the database have come from the Trusts & Foundations donor type, however it should be noted that a significant proportion of the database in terms of numbers of donations reside in Activity types that are dominated by Individual Donations.

For example, Individual donations made to the Education activity type alone account for just under 40% of the entire 730,000 records throughout the database.

This trust was founded in 2001 by Lady Helen Hamlyn, who was the second wife of the German-born British publisher and philanthropist, Paul Hamlyn.

Paul began his first bookselling business in 1947, and he was to make his name as an entrepreneur and an innovator through his ability to create new, relatively affordable products that brought high quality to the mass market. Some of the more famous examples of these were illustrated cookbooks, classical music recordings and high quality art books.

He was a founder of publishing conglomerate Octopus Books, which was eventually sold in 1987 to Reed Elsevier for £1200m. His own Paul Hamlyn Foundation was established in 1987 with a £50m endowment taken from the sale of the company.

The largest proportion of these donations have been made to causes associated with Arts/Culture (57) followed by Education/Training (38), Health (13), Heritage (12), Disability (7), Children/Youth & Environment (6), Elderly (4), International Development & Welfare (3), Development/Housing/Employment (2), and Animals, Sport and Religious Activities (1).

Stephen Lewin is a solicitor with Bircham Dyson Bell LLP. He is a Trustee of the Betty Lawes Foundation, The Broderer’s Charity Trust and The Tony Blair Governance Initiative.

Dr Deborah Swallow is a Märit Rausing Director of the Courtauld Institute of Art. She is a Trustee of Asia House.

Brendan Cahill is an academic administrator and the Executive Director of the Institute of International Humanitarian Affairs at Fordham University.

Margaret O’Rorke is a ceramics artist and a sculptor.

Dr Kate Gavron is a social anthropologist who is associated with the Institute of Community Studies and Mutual Aid Centre.

Dr Shobita Punja is an arts historian and a lecturer.