Welcome to the August 2016 issue of the Factary Phi Newsletter.

Sue Ruddick and her husband Simon, who is the Chairman of Hedgefund firm Albourne Partners, have reportedly gifted £125,000 to 10 different theatres across the UK.

In particular, their donation has been made in order to reduce the ‘typical’ stampede that is commonly associated with the ladies rooms in a number of UK theatres.

Mrs Ruddick, who has apparently become intimately acquainted with the quality (or otherwise) of the West End’s amenities through attending the theatre two or three times a month with her friends and family, described their donation as ‘(not) glamorous but (…) absolutely essential’.

The Ruddicks were also quick to clarify that they do wish to see bathrooms up and down the country emblazoned with their moniker.

As voted for by Dow Jones, HarperCollins UK and News UK, the Rainbow Trust Children’s Charity, Walking with the Wounded and Solace Women’s Aid are all set benefit from a substantial donation from media agency News Corp.

The Rainbow Trust is to receive the largest proportion of funding (£50,000), which will be used in order to benefit 50 seriously ill children who would otherwise face an uncertain future.

Emma Haines, who is the Director of Marketing and Fundraising for Rainbow Trust Children’s Charity, said: ‘We are so grateful to News Corp for its £50,000 donation. This money will make a significant difference, enabling us to support even more families who have a child with a life threatening or terminal illness, when they need it most. Rainbow Trust Family Support Workers spent 7,671 hours last year helping to organise vital hospital appointments, explaining medical terms and helping look after sick children in hospital.’

Solace Women’s Aid and Walking with the Wounded will also receive donations of £25,000 each.

This month we have included our summary of the 2016 Public Trust and Confidence in Charities report. The research for this report was conducted by Populus on behalf of the Charity Commission.

As was also the case in previous editions of the report, the 2016 research monitored the level of public trust and confidence in the sector as well as number of other key questions. It also explores the issues which affect the public’s trust and confidence, with variations in the results measured according to age, gender, region and socio-economic group amongst other factors.

According to the report, two of the most important and recurring talking points that have been uncovered as part of the research are charities sense of accountability, and their use of fundraising techniques. The second of these has been brought into the spotlight by negative press coverage both in 2015 and in 2016, and this has also been underpinned by a growing sense of disquiet amongst the public. Three quarters of respondents (76%) agreed that some of the fundraising techniques used by charities made them feel uncomfortable, which is up from 60% in 2014

With that said, many respondents spoke of their choices to support charities that provided alternative ways in which to donate, for example by sending goods rather than money. Interestingly, this approach has been taken up by quite a large number of smaller charities, who effectively make up a very large proportion of the sector as a whole (94% of registered charities have an income of £500,000 or less, and 81% have an income of £100,000 or less)

When asked what the most important qualities are for fostering a sense of trust and confidence of charities, respondents showed a clear preference for charities that satisfy their needs for transparency and impact. Ensuring that a reasonable proportion of donations make it to the end cause was cited as the most important quality, followed by a sense of making a ‘positive difference’ to the cause the charity is working for. According to the report, the sector will also need to work particularly hard to improve public belief that charities are more competently managed.

Harris Interactive for Third Sector found that recent media stories have made 33% of the public think worse of charities, while NfpSynergy research found that there has been a marked decline in trust in charities from 70% in early 2010 to 48% in late 2015.

It is thought that if members of the public recall more of what they have gained from the work of charities, they would be more inclined to give them higher trust and confidence scores. The same is also true when discussing the work of the Charity Commission.

Though 60% of the public believe that charities are regulated effectively and half of respondents agreed that charities are regulated to ensure that they are working for the public benefit, only half of the public (50%) have heard of the Charity Commission, which was down slightly from 55% in 2014. However, when the role of the Charity Commission is explained, 88% said that this role is important, and 57% said the role is essential. This has risen consistently from 45% in 2005. It is thought that working to increase public understanding of the Commission’s role would help to create a more informed context in which to debate the behaviours of charities.

For this month’s database update, we thought it might be interesting to survey and compare some of the largest donations to have been made by Trusts & Foundations across some of Phi’s various activity types.

Below, we have included a chart displaying the spread of these donations made to Education/Training, Arts & Culture, Health, Welfare and the Children/Youth activity type. For this analysis ‘Large Grants’ equals donations of a value of between £100,000 and £499,999. 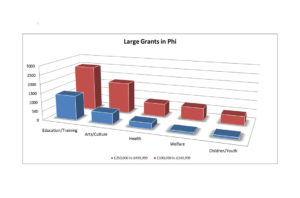 As is evidenced by the graph, charities involved with Education/Training and Arts/Culture appear to have attracted the largest number of donations within this range, and by some distance. The next most common being Health, followed closely by the Welfare and Children/Youth activity types.

It should be noted that the data is based on donations as they appear in Phi, and it is therefore not necessarily representative of the wider giving sector as a whole.

The trust was established in 1986 by the Edinburgh based former concert pianist Carol Grigorm, whose family were ranked by Forbes in 2014 as one of the richest in America, with an estimated wealth of $1.3bn.

This is based on the family’s ownership of the privately held electrical equipment distributor Consolidated Electrical Distributors (CED). Carol’s father, Richard Colburn, began his career as an accountant and was later an investment banker, before then moving into wholesaling and the distribution of construction equipment.

Aside from the above, little is apparently known about his business life. He rebranded the family business as CED (Consolidated Electrical Distributors) in 1964, and he also rescued the Denver-based building materials and uranium mining company Susquehanna Corp. At aged 65, he then founded construction equipment rental firm U.S Rentals.

An amateur viola player, he was a major financier of music and music education in America. He died in 2004.

His daughter Carol has been a major supporter of the arts in Britain. She was honoured by being appointed as the honorary Vice-President of the Edinburgh International Festival in 2013, and she is a recipient of both the Prince of Wales’ medal for arts philanthropy and the Chevalier de l’Ordre des Arts et des Lettres.

The highest proportion of these have been made to causes associated with Arts/Culture (292), Welfare (22), Education/Training (21), Environment (19), Heritage (17), Religious Activities (16), Children/Youth (6), Health (4), General Charitable Purposes (2), Animals, Elderly, International Development and Sport/Recreation (1).

Dr Catherine Hogel is a medical doctor who currently holds positions as a Trustee of the Dunard Fund, the Colburn School of Performing Arts and as member of the Honorary Board at the Royal Opera House. She attended medical school in London and she has also studied at Durham and Harvard Universitiy.

Erik Hogel is also a Trustee of Dunard Fund in Edinburgh.

Colin Liddell is a senior Partner with the law firm J&H Mitchel. He specialises in charity law and he also holds positions as Chairman of Pitlochry Festival Theatre and Aberfeldy Highland Ball. He is also a Trustee of the Peter Dixon Charitable Trust.

Peter Thierfeldt is a director of the Partnership Matters Development Consultancy and he also holds positions in the development department of the NVA and St Mary’s Music School. He is also listed as a training consultant for Resourcing Scotland’s Heritage and he is a Trustee of the Royal High School Preservation Trust and the George Wyllie Foundation.